American airline United Airlines is facing some serious PR drama at the moment with reports surfacing the airline did not allow a woman an unopened can of Diet Coke for fear it could be used as a weapon.

And yet apparently the man next to her was handed an unopened beer can.

United is facing a storm of backlash, being branded as ‘Islamaphobic’ as the woman in question was Muslim.

Per reports in SBS, the airline has seen multiple threats of boycotts, not just in America, but globally.

The woman , Tahera Ahmad, posted to Facebook to describe the incident, writing she was in “tears of humiliation from discrimination”. 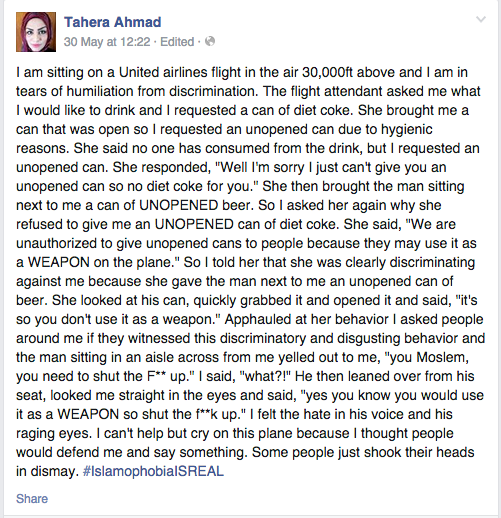 Social media has rallied around Ahmad, using the hashtag #unitedfortahera to express support.

And yet, United Airlines also has people behind it.

We’ve never gotten unopened can of Coke on a .@united flight. We stand behind United. #unitedfortahera is a crybaby making trouble for gain.

United Airlines has released a statement apologising to Ahmad.

The statement in full: “The flight attendant onboard Shuttle America flight 3504 attempted several times to accommodate Ms. Ahmad’s beverage request after a misunderstanding regarding a can of diet soda. The inflight crew met with Ms. Ahmad after the flight arrived in Washington to provide assistance and further discuss the matter. Additionally, we spoke with Ms. Ahmad this afternoon to get a better understanding of what occurred and to apologize for not delivering the service our customers expect when traveling with us. We look forward to having the opportunity to welcome Ms. Ahmad back.”