The UK has voted to leave the European Union and the shockwaves are only now starting to ripple out.

What that means really is yet to play out, while the impact on the media and advertising industry’s both there and in Australia is yet to be seen,

That said, there has been predictions that it the leave vote will have serious repercussions on the UK economy and that naturally will flow onto advertising and marketing spends. It will also have a negative impact on the global economy – namely in downturns – and that will flow-on to Australia.

On Wednesday B&T reported that GroupM had predicted “that ad spend (in the UK) forecast was initially supposed to increase 7.2 per cent for this year (and that was with the ‘remain’ vote winning), but that’s been downgraded to 6.3 per cent. It means it’s a drop of £220 million, of which majority is coming from the TV and print markets. Still, the forecast is at a healthy increase of £17.3 billion, making it one of the fastest growing markets”.

Meanwhile, the pro-leave media, led by The Sun and The Daily Mirror – have been first to release editions gloating of the win. The Sun led with “See EU later”… 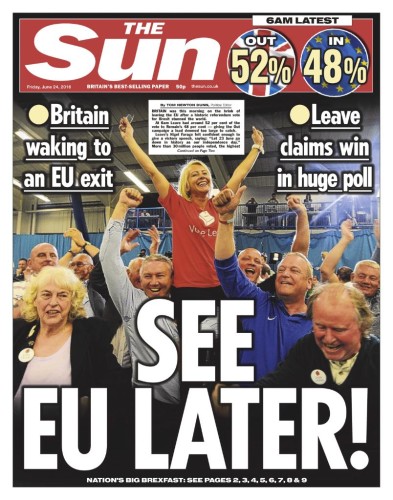 While this was the Daily Mirror’s front page… 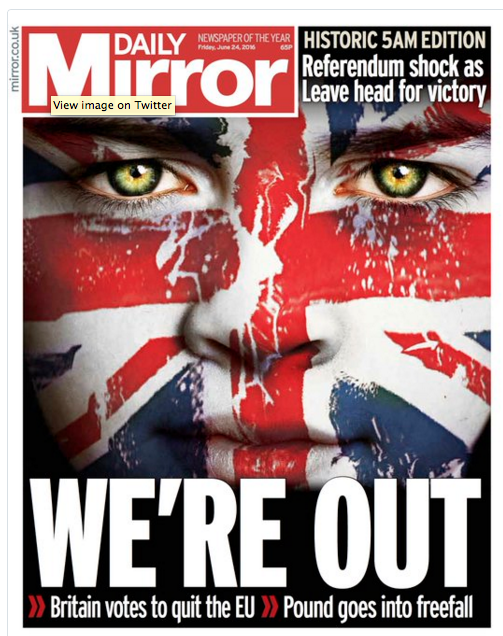 Meanwhile, the Aussie behind the “remain” campaign, M&C Saatchi’s UK-based executive director Bill Muirhead, has defended his decision to run a negative and too critical campaign.

“Yes, you would have to say it didn’t work and I think that obviously we will have to wait and see what the consequences are,” he told News Corp media.

“Obviously we didn’t take the gloves off enough and maybe there was too much caution, maybe too much concern about attacking each other in terms of not launching hits in the campaign. Obviously there will be a big wash up, with the vote now saying we are out then there isn’t going back so a whole new world will unfold.”

The big question remains – what happens next? Interestingly, the vote was merely a referendum and that doesn’t necessarily mean the government even has to go through with it. Although it would be highly unlikely that it would ignore the will of the people. What the UK’s leaving means is yet to be seen and nothing will likely happen until plans are fleshed out. And that my not be until 2018.

Also, nowhere in Scotland did they vote leave, meaning the Scots may leave the UK and attempt to remain allied to the EU.

However, there may not be an EU at all. Britain’s leaving could start a domino effect of countries wanting out. It’s believed there’s a growing disquiet among a number of European countries – namely the rich ones propping up the poor ones – with Spain, France, Portugal and The Netherlands all said to be considering their futures, too.