It’s taken more than six years, but Uber has finally surpassed taxis as the private transport of choice for Australians, according to new research from Roy Morgan.

A total of 22.9 per cent of Australians over the age of 14 choose to ride with Uber, as opposed to 21.8 per cent still opting to jump in a cab.

This is the first time the rideshare app has been more popular than its rival, which according to Roy Morgan is a result of its more tech-savvy user base continuing to grow.

Roy Morgan CEO Michele Levine said that although the changing of the guard “comes as no real surprise”, Taxis have remained popular with older generations.

“The data shows that while taxi usage has remained relatively stable over the past few years, it is the 35-64 year age group that is taxis’ largest consumer base,” she said.

“As this group continues to age, it is likely we’ll see the number of taxi users continue to fall.”

“As these younger, more tech-friendly generations take up a greater proportion of the population, Uber is likely to continue to rise in popularity.” 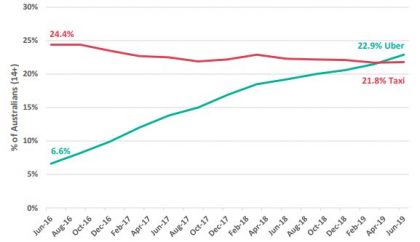 The research shows Uber riders are also more likley to be classified as healthy, with 82 per cent reporting they feel well and in good health, almost half (46 per cent) concerned about their sugar intake, and 30 per cent love doing as many sports as possible.

Uber users are 144 per cent more likely to have recently snowboarded than taxi riders.