A Twitter bot called @DroptheIBot is doing the rounds by correcting people who use the term illegal immigrant, unfortunately people aren’t happy about being schooled by a robot.

This bot works in a similar way to the @she_not_he bot corrected people who misgendered Caitlyn Jenner, @DroptheIBot leaves an automated comment on a tweet using the term ‘illegal immigrants’. 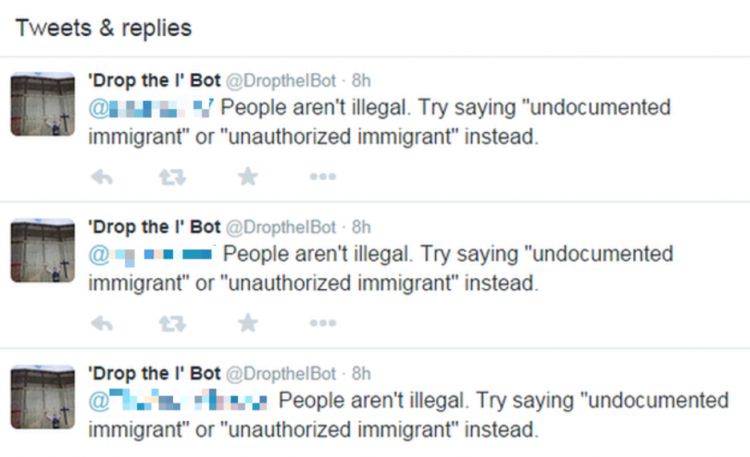 In an article written for Fusion, the two American journalists who created the bot Patrick Hogan and Jorge Rivas discussed the inspiration behind the bot.

“In a modest effort to help America shed some of its historical baggage, we built a Twitter bot that replies to some of the people who tweet the words ‘illegal immigrant’, letting them know that in 2015, the preferred terms are ‘undocumented immigrant’ or ‘unauthorised immigrant’.”

The account has corrected over 800 users since it was created last week. To avoid spamming people, the Twitter bot only ran every ten minutes, and did not comment on the same user twice.

A bunch of angry Americans are not impressed by a robot telling them what to do:

@DroptheIBot Undocumented Immigrant is LIBERAL P.C. CRAP – Try saying that in ANY COUNTRY outside the U.S. The correct term = ILLEGAL!

@DroptheIBot They broke the law entering her illegally, that makes them illegals . Shove your PC BS !

Some reactions have been positive:

@DroptheIBot sorry, I didn’t think of that. Thanks.

Hogan added: “The reaction has been mixed, as I’m sure you can imagine. You can find some of our favourite examples in our original post, but quite a lot of people were upset to be corrected on social media, with not everyone realising it was by an algorithm.

“A handful of people responded positively, with a few others, while not being completely positive, seemed thoughtful about their use of the language, which I think is the least we can hope for.”

Featured image from the Fusion article.