As 10’s own Tim Bailey would attest, who doesn’t love the zany TV reporter?

Likewise, KMAX-TV’s funny-man, Angel Cardenas, has been equally entertaining audiences on Good Morning Sacramento with his upbeat style of reporting.

Sadly, things came undone for the hapless Cardenas over the weekend following his live  report from the Sacramento International Auto Show that didn’t quite go to script and saw him sacked by network chiefs.

Cardenas was reporting live from the car show when he began jumping on classic (and very expensive) vehicles, gyrating on them and allegedly damaging them in the process. He then grabbed a “keep off” placard before telling audiences: ‘‘Oh boy, I’m going to get in trouble.” 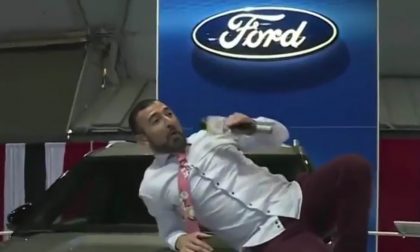 TV viewer Adam Copeland was none too pleased with Cardenas’ reporting style, posting to Facebook: “Never seen such a disregard to someone else’s vehicle”. 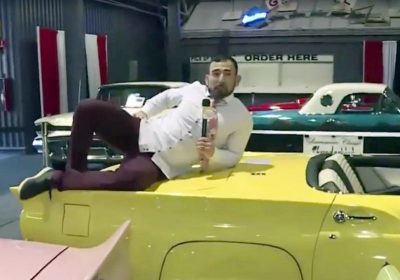 The footage made it to organisers of the car show who subsequently complained to Cardena’s bosses.

One of the show’s producers, Stacey Castle Bascom, later admitted that none of the cars were damaged but Cardena’s antics were an “astonishingly awful incident” and the reporter had been “terminated immediately”.

Check out some of Cardena’s performance below. Sadly, B&T could only find this grainy footage of the incident.