Advertise with us
Posted 9 September, 2019


Europe has just sweltered through one of its hottest summers on record but, as an upside, it appears to have proven the perfect environment to grow large, lush marijuana plants.

A fact on show during the weekend coverage of Spain’s prestigious La Vuelta a Espana cycling event.

A TV helicopter was filming the latest leg as the peloton raced through the town of Igualada in the Catalan region in the north-east of the country.

Although not initially picked-up by race commentators, eagle-eyed viewers quickly spotted a large marijuana crop growing on top of a rooftop apartment. Check out all the herbaceous race action below:

Sadly, for the crop’s owner, the footage made social media which soon caught the eye of Igualada’s local police.

According to media reports, the crop has been seized by authorities, however, no arrests have yet been made. 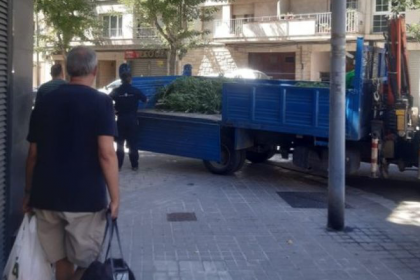 “We received information via social media that there was a marijuana plantation on the roof of a block of flats in Igualada,” a spokeswoman for the Mossos d’Esquadra, the Catalonian regional police force, told The Guardian.

“We began an investigation, which is still underway, and we have seized 40 plants. For the moment, there have been no arrests.”