No, this is not a joke! Donald Trump‘s team have edited his face onto the body of teenage climate change activist Greta Thunberg after she was named Time‘s Person of the Year yesterday. 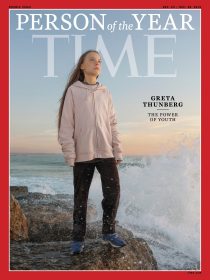 The official Trump War Room account on Twitter posted the Photoshopped cover straight after the 16-year-old Swede was awarded the prestigious accolade for “turning vague anxieties about the planet into a worldwide movement calling for global change”. 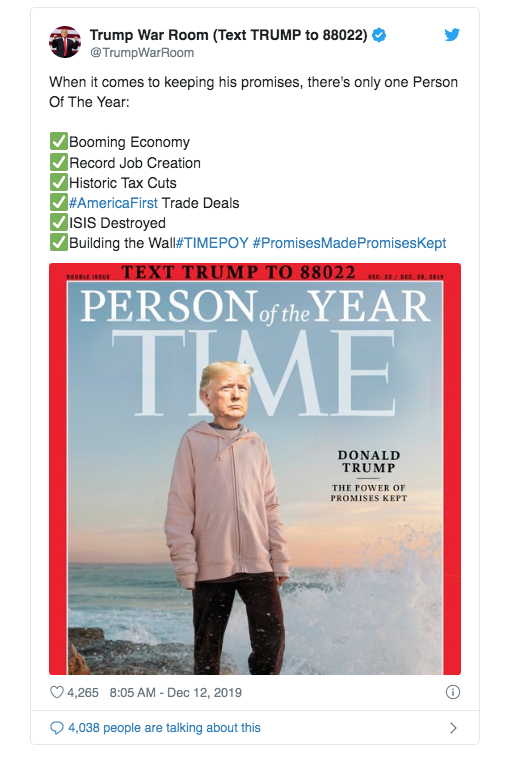 Trump had been one of the finalists for this year’s honour alongside Nancy Pelosi, The Whistleblower and the Hong Kong protestors.

Following Time’s announcement of Thunberg’s honour, Trump himself tweeted: “So ridiculous. Greta must work on her Anger Management problem, then go to a good old fashioned movie with a friend! Chill Greta, Chill!”

However, Trump’s social media team appear hellbent on believing their man was duped out of this year’s title. The president had previously won in 2016.

A spokesperson for Team Trump saying: “When it comes to keeping his promises, there’s only one Person Of The Year.”

Not that all of Trump’s supporters agreed the president should’ve been Time’s 2019 Person Of The Year.

Trump’s son, Donald Trump Jr, tweeting that Hong Kong’s pro-democracy protesters who were “fighting for their lives and freedoms” would’ve been a better choice than Thunberg whom he described as “a teen being used as a marketing gimmick”.

All this comes after the Trump War room posted a video of the president earlier in the week as the villain Thanos from the film Avengers: Endgame which features the character saying “I am inevitable” before snapping his fingers in an attempt to wipe out all life in the universe.

However, in the Trump spot he appears to liquidate a host of Democrat senators trying to impeach him.

House Democrats can push their sham impeachment all they want.