It’s a terrifying world out there, especially in Adland, and at B&T we love any excuse to watch people have the beejeemers scared out of them.

Check out how the industry marks the scariest day of the year.

1. For the parents out there, you’d know Halloween can do some pretty messed up things to your kids, as seen in this ad by Publicis Kaplan Thaler for Crest and Oral-B.

2. The best part about this Ford ad from Team Detroit is the little disclosure that says, ‘Closed Car Wash. Do not attempt’.

3. Tesco takes things to another level with this BBH London’s “Spookermarket” campaign, which has 90-seconds of hidden-camera goodness. Watch these unsuspecting shoppers keel over in fright!

4. Superior created this gem in a so-ridiculous-its-funny kind of way. Especially if you like your creepy Halloween with a side of sexy.

5. If it’s a choice between Zumba Zombie and life as the undead, we choose the latter.

6. Because you never know when some crazy man in a mask with a chainsaw is going to chase you, at least if you’re wearing Nike shoes you’ve got a shot at outrunning him.

7. This ad did all the home renovators out there a favour by reminding us that all we have to do to repel ghosts is paint our house with Dulux.

8. Snickers again making a comeback with this print ad by TBWA\Chia\Day, so good it won a Gold Lion at Cannes in 2007. 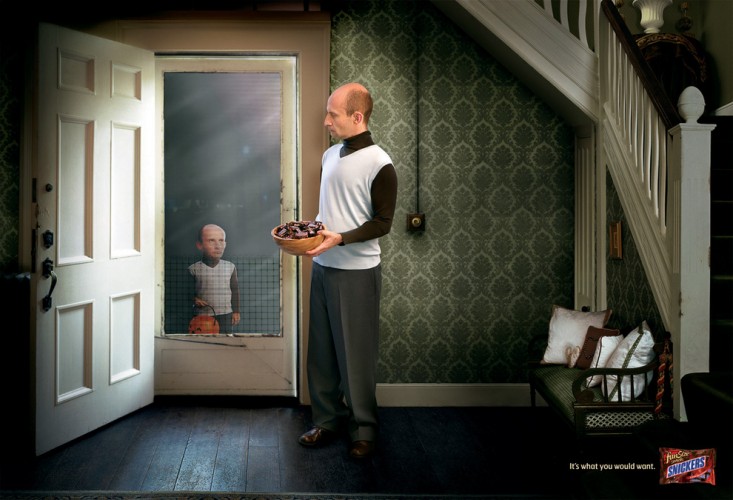 9. Taking heed from all the horror movies is this ad from BBDO Germany, making it very appealing to buy a car with no backseats (it was 2007 after all).

10. And rounding out the top 10 is The Ring inspired ad from Saatchi & Saatchi, Stockholm, with an unexpected twist.