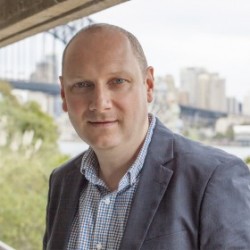 
As Australians turn to cashless payments in ever increasing numbers, vendors selling The Big Issue are making the move to contactless payments for those wanting to pay for the magazine without cash.

A new integrated campaign by full service creative agency Town Square has been launched to show how vendors are ‘Now accepting’ the new digital payment methods.

Each self-employed Big Issue vendor buys copies of the fortnightly magazine for half the cover price and retains the retail margin as their income.

After consulting with vendors, The Big Issue has adopted two new payment systems to enable customers to pay without cash from November: Airpay, a tap-and-go credit/debit card terminal powered by NAB that the vendor wears on a lanyard; and Beem It, an app that allows transactions between vendor and purchasers’ mobile phones.

Town Square, which has been working with The Big Issue on a pro bono basis for a number of years, has developed the campaign in association with Carat, who has secured donated media on TV, cinema, radio, press, OOH and online.

The campaign highlights often overlooked vendors, who run the risk of being left behind by a cashless society and creates an association between individual vendors and world’s most trusted payment brands.

The Big Issue CEO Steven Persson said: “The Big Issue is addressing the trend towards digital transactions. This campaign is our proud announcement that vendors are now trading with contactless technologies, as well as cash.

“The campaign has its creative focus firmly where it should be – on the vendors – and we look forward to seeing more Big Issue readers enjoy the magazine, knowing that each transaction is helping marginalised Australians to earn a living in the community.”

Town Square director Harry Corsham said: “Imagine the challenge of creating a digital payment system for a national network of self-employed, homeless and disadvantaged people. It’s a big, complicated project and one we are very proud to have been part of.

“With so much complexity behind this innovation, Town Square sought to address the communication challenge with radical simplicity.

“And it’s the simplicity of the campaign that makes it flexible enough to run across the many media channels our friends at Carat have secured from a wide range of supportive media partners.

“We’re proud to be collaborating with so many parties to give vendors the support they need to earn an income.”

Carat client operations director Lizzy O’Connor said: “It’s so rewarding to witness the generosity of our long-term media partners who have really got behind this great cause.

“With such an agile campaign that cuts through so many mediums, we have been able to secure a very robust media plan for the metro areas where vendors work. It’s great to see the industry get behind such a worthy cause.”