Data from digital marketing agency Amobee has revealed which brands are most likely to stick in Aussies brains around the latest film in the Star Wars franchise, Star Wars: The Force Awakens.

Amobee has utilised its Brand Intelligence technology to explore the brands that have aligned themselves the most with the new Disney movie, in a bid to capitalise on its unparalleled success. The data was collected between 11th October-10th December 2015.

Amobee Brand Intelligence technology measures key trends and content consumption to provide comprehensive monitoring of market position, related trends and sentiment, as well as relevant consumer interests using real-time and historical data from across the digital ecosystem. These include what was seen, read and watched across the whole Internet – not just what was “said” on social media.

Liam Walsh, managing director, ANZ at Amobee takes us through the top 10 brands most associated with Star Wars in Australia.

1. Lego
Lego has a long history of being synonymous with Star Wars with its most popular products being modeled on Star Wars characters and story-lines. The Ultimate Collector’s Millennium Falcon is the most expensive Lego piece on the market, with its RRP increasing 87 per cent since 2007 when you could pick it up for $713.17. Today the collector’s item will set you back $5,647.23, indicating that the Star Wars franchise is still an important part of popular culture and a key driver for the entertainment and toy industries.
The Death Star II and Imperial Star Destroyer products, released in 2005 and 2002 respectively, now fetch more than $2,082.31. To celebrate the upcoming release of The Force Awakens, Lego has released a Lego version of the official poster. 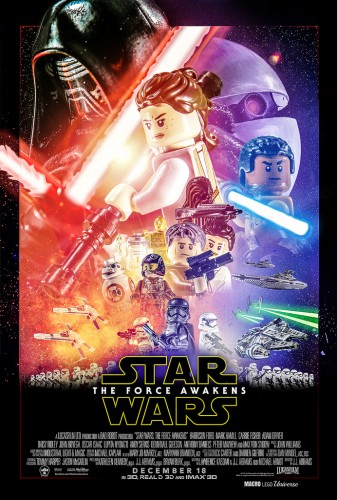 Google has achieved close association with the Star Wars brand by creating an online game called ‘Awake the Force Within’, which allows players to ally themselves with Yoda, Rey, the Light Side, the Rebel Alliance or the Dark Side. The game is fully integrated into each of the Google apps, meaning that choosing a side allows a user to skin each of their apps with the side they choose and changes the Google Maps interface so that a users chosen route is illustrated using TIE fighters or X-Wings.

Hasbro has secured the major merchandise licensing rights for Star Wars for a reported $225 million. The company could be set to make a tidy profit, with Forbes forecasting that Star Wars related toy sales could produce in excess of US$835 million.

Hasbro has a track record of success with the Star Wars franchise, with merchandise sales for the release of Episode I: The Phantom Menace in 1999 accounting for 36 per cent of Hasbro’s US revenue.

Target is one of the many retail outlets which is stocking Star Wars merchandise in the lead up to the movie release and Christmas. Aiding this association, Disney tapped into the cultural phenomenon of unboxing by creating a global unboxing day called ‘Force Friday’.

In Australia, six Target stores opened up at midnight on Friday 4th September, allowing fans to be the first to shop the new range of merchandise. Target also encouraged fans to document the ‘unboxing’ of the toys using the hashtag #forcefriday.

The Disney Company, leveraging their ownership of ESPN, used the network to premiere the final trailer for Star Wars: Episode VII – The Force Awakens, during halftime of the Philadelphia Eagles win over the New York Giants. Audiences peaked to almost 16 million viewers while the three minute trailer was on the air, making Monday Night Football the most watched program on October 19. On December 15, ESPN is hosting a special half hour program hosted by Mark Hamill that will trace the history of the lightsaber duel, an activity much likened to the sport of Kendo. 6. HP