Tobacco giant Phillip Morris – makers of the likes of Marlboro and Benson & Hedges – has been accused of “staggering hypocrisy” after a new print campaign was accused of merely attempting to bypass cigarette advertising laws.

The campaign, that ran in British newspapers and as a social media campaign (see below), is called “Hold My Light” and is designed to promote the company’s range of smoking alternatives, including e-cigarettes and “heat not burn” tobacco products.

Phillip Morris is no longer able to advertise its cigarettes directly in Britain because of the advertising ban on tobacco products.

For its part, the company claims its smoking alternatives are “an important next step” in its aim to “ultimately stop selling cigarettes”. 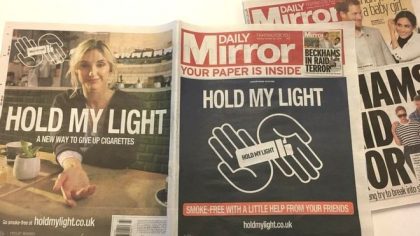 However, critics of the campaign said it was hypocritical considering it still actively promoted and sold cigarettes in other countries that were yet to ban or restrict cigarette advertising.

“Smoking is the leading preventable cause of cancer and we encourage people to switch away completely from smoking, including through the use of e-cigarettes,” Butterworth said.

British stop smoking charity ASH, noted that Phillip Morris was one of a number of of tobacco companies which recently lost a legal challenge aimed at blocking laws on plain packaging for cigarettes.

“A massively profitable global tobacco company is selling the line that they’ve turned over a new leaf in an effort to flog their latest gadgets.

“If they were serious about a smoke-free world they wouldn’t challenge tobacco legislation around the world but instead support regulations that will really help smokers quit and prevent children from taking up smoking.”

However, Peter Nixon, managing director of Philip Morris Limited, defended the campaign: “There are more options than ever before for smokers to give up cigarettes but often they don’t realise that alternatives, like e-cigarettes and heated tobacco are a better choice than continuing to smoke.

“Our research has shown that smokers want personal support from friends and family if they are to give up cigarettes – and that is what Hold My Light is designed to offer,” he said.