Killed and imprisoned journalists – “The Guardians” – have been named Time magazine’s 2018’s “Person of the Year”.

The magazine has used four different covers featuring journalists that have been targeted for their work over the past 12 months.

Included on the four covers are Saudi editor Jamal Khashoggi who was killed in the Saudi embassy in Turkey in October by government operatives. 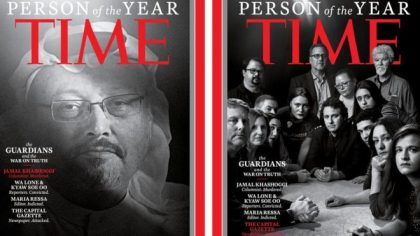 Another cover includes staff from the US newspaper the Capital Gazette. In June, a gunmen stormed its editorial offices, killing five and wounding two others. Thirty-eight-year old Jarrod Ramos, who had a long held grudge against the newspaper, was later charged with five counts of murder. 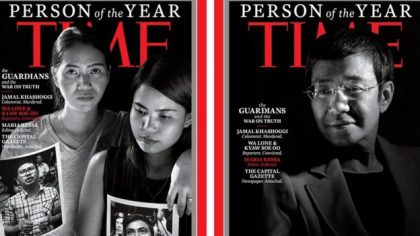 Famed Philippines journalist and activist, Maria Ressa, appears on another striking cover, while on the fourth the wives of imprisoned Myanmar journalists, Wa Lone and Kyaw Soe Oo, hold photographs of their husbands.

Commenting on this year’s winners, Time editor Ed Felsenthal said: “For taking great risks in pursuit of greater truths, for the imperfect but essential quest for facts that are central to civil discourse, for speaking up and for speaking out, the Guardians are the Person of the Year.

“As we looked at the choices, it became clear that the manipulation and abuse of truth is really the common thread in so many of this year’s major stories,” he said.