As the world’s largest platform for live, public conversations, in 2014 Twitter was the place where Aussies discussed and searched for information about local and global events in real-time, across all different sectors.

Not surprisingly: sports, celebs, reality TV and politics peaked our interests in 2014.

When tragedy struck, controversy arose, an issue took hold or we just wanted to poke a bit of fun, Australians were quick to take to Twitter throughout the year.

As we head swiftly into 2015, please find below an official look at the year on Twitter in Australia for 2014. Also head to the Twitter Australia Blog for more information and insights into global moments on Twitter this year. And to relive more of the biggest moments from around the globe this year, check out 2014.twitter.com.

For specific sport, entertainment or politics insights, do let us know. A Twitter Australia spokesperson is available for comment and interview.

2014 marked the World War One centenary, a moment that Australians marked poignantly on Remembrance Day – which saw the largest concentration of Tweets across the year locally – making this our number one moment.

Politics continued to be a key discussion point, with the PM cancelling his visit to Deakin University taking a close second, and students interrupting the Q&A broadcast also featuring in the top ten.

Worldwide, a record 672 million Tweets were sent about this year’s World Cup finals in Brazil. In a World Cup year it is perhaps no surprise that half of the top ten peak moments were sport-related. From the AFL, to the race that stopped the nation – the Melbourne Cup, to cricket, Aussies clearly love both playing and discussing all types of sport.

Perhaps unsurprisingly, one of our most well-known exports, 5 Seconds of Summer also featured twice in the top ten list following two very successfully awards evenings at the MTV EMAs and the VMAs:

The Golden Tweet of 2014 Retweeted by Australians was Lorde’s Tweet about a photo-shopped image of herself compared to the unaltered photo, featuring the message that “flaws are ok,” registering 73,619 Retweets.

Aussie entertainers dominate the top of the most Retweeted list, including Cody Simpson’s Tweet featuring an image of him and Justin Bieber, some fun from Iggy Azalea and Rebel Wilson, and Russell Crowe offering a forthright opinion.

The impact of Phillip Hughes death was demonstrated in Tweets about the tragedy making up one third of the most Retweeted list, with Tweets from Cricket Australia, Michael Clarke, David Warner and Brett Lee all featuring prominently.

i find this curious – two photos from today, one edited so my skin is perfect and one real. remember flaws are ok 🙂 pic.twitter.com/PuRhxt2u2O
— Lorde (@lordemusic) March 31, 2014

Turkey has banned Twitter? That is a terrible decision. I don’t understand it. — Russell Crowe (@russellcrowe) March 21, 2014

We are extremely sad to announce that Phillip Hughes has passed away at the age of 25 pic.twitter.com/RjIWcqlT2v
— cricket.com.au (@CricketAus) November 27, 2014

Happy bday bro. Will love you forever. It has been the hardest few days of my life. — Michael Clarke (@MClarke23) November 29, 2014

Brothers in arms, RIP mate. I will always walk out there forever knowing your by my side. Love you BRAZ!! pic.twitter.com/Qxq2Jy0Pyx
— David Warner (@davidwarner31) November 27, 2014

Bloody fantastic @danielricciardo GP winner get in there!!! 1st of many….

Australians come to Twitter for many reasons, with the main ones reflected in the highest trending hashtags locally in 2014, including politics, news, sport and television, with the rise of Twitter as the second screen evident in the top ten list: 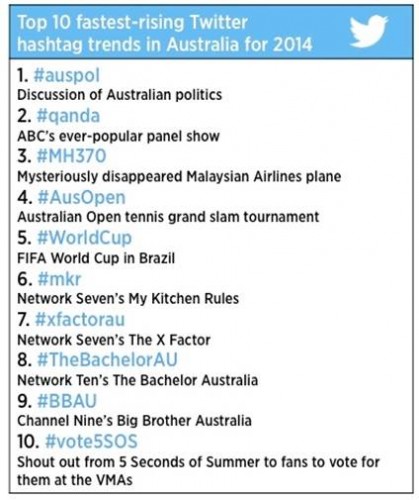 When it comes to the most followed Australians on Twitter, our many world famous entertainment superstars dominate, with each of them using Twitter to give their massive global fan bases great insider access: 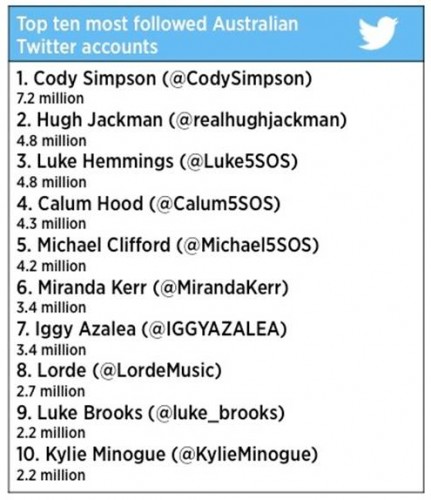 2014 saw a number of new local stars burst onto the scene, both here in Australia and abroad, and mirroring this, their Twitter growth was huge! Up and coming RnB artist Iggy Azalea took the world by storm this year, and also our number spot, with a follower growth of 81%. From our wonder boys, 5SOS, to iconic Aussie celebs such as Hugh Jackman and Miranda Kerr, entertainers had some of the strongest follower growth in 2014: 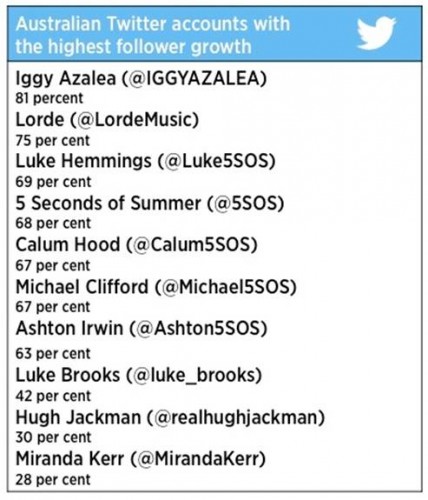