A sponsorship of a sports team – particularly an AFL or NRL team – can do wonders for brands; however you need to have a strong action plan if and when things go tits up.

Watts says brands increasingly want to hitch their wagons to sporting clubs, arts events and charities but often go in with the best of intentions without doing their homework. “They rush head long in without doing the correct corporate governance,” Watts told B&T.

And things can quickly sour. The drug scandals that have wracked the Essendon AFL Club and to a lesser extent the Cronulla Sharks in the NRL a perfect example. 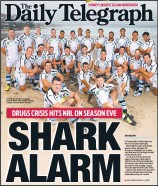 And when the shit proverbially hits the fan – be it bad player behaviour or even reckless management – brands need a plan.

Watts, however, says Essendon’s chief sponsors – Kia, True Value Solar and Fujitsu – have done the right thing to stick by the Club over the two-plus years it’s been embroiled in its player drug scandal.

“Essendon’s partners, to their credit, have stuck by the Club through thick and thin,” he said. “That’s also been really good management by the Club, they’ve been honest with their partners, transparent as they could be, and have clear and consistent communication.

“Ultimately I think these sponsors are going to be an even better position with fans and members for sticking by the Club and even the broader AFL communities,” he said.

But a ‘siege mentality’ is not always the best option. Watts agrees superannuation firm HOSTPLUS was right to pull its sponsorship when NRL club, the Melbourne Storm, were busted for cheating the salary cap in 2010.

“HOSTPLUS look after people’s superannuation, they have to be seen to be effective financial managers and the Club had misappropriated funds and for HOSTPLUS it really became untenable.

“For HOSTPLUS it was right to leave but then you take Nike’s case with Tiger Woods; the right thing to do was to stay. They’d stuck with him through his entire career – thick and thin – and he was still the best golfer in the world and that’s what Nike’s branding is all about.”

Watts’ advice when planning any sort of sponsorship – be it a major sporting team or even a minor arts festival – is to do all your due diligence first. Where possible, sponsor the club NOT the player. “Players and administrators come and go, the clubs remain,” he said.

Make sure you allocate appropriate resources to manage the partnership. Don’t just give an event or team your name and walk away from it and hope for the best. And lastly, if things go pear-shaped, make sure you act immediately on it. “Be honest and transparent,” Watts said, “don’t try and cover anything up.

“Could there have been a backlash from fans had Essendon’s sponsors pulled out? Yes, very probably. But I think if (a brand) makes the right moral decision, if the fans still turn against you then you can still sleep well at night. Or if you stick by the club and still cop it you can also sleep well at night,” he argued.