Still in the wake of Telstra’s national outage on Tuesday – and far from forgotten for many Telstra customers – you’d be forgiven for thinking a light-hearted joke might be well received.

Customer Jaime Murphy took to social media to vent her frustrations of being left without a phone or internet, and the long exchange resulted in Ben effectively taking the piss and posting a cute Puss in Boots meme apologising. 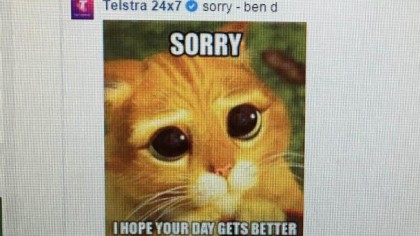 It all started when Murphy commented on the post by Telstra 24×7 offering free data this Sunday to customers left without service on Tuesday.

“What about all the NBN customers that have no internet or home phones? What do we get? A new ISP, that’s what!,” she asked.

But, the Telstra 24×7 representative, identifying himself as ‘Ben D’, merely directed the woman to the Service Status page, seemingly ignoring the woman’s call for compensation.

“So no internet, no home phone, and no Foxtel on the box for God only knows how long. So again, what do we get in compensation?,” Murphy responded.

It was here that Ben D came back into the picture, and poured fuel on an already angry fire by repeatedly cocking up the spelling of Jaime’s name. 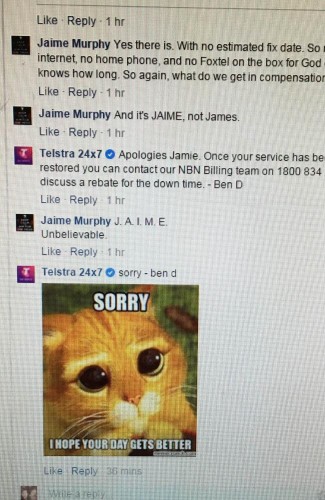 Murphy said the continued mix up was “unbelievable”.

“They are acting very unprofessionally at the moment and to call someone by the wrong name and then miss spell it when it’s pointed out I just couldn’t believe it,” Ms Murphy said.

Then, came the apology meme.

“When I saw the meme I genuinely felt I was being mocked and that they must have a work experience kid answering Facebook posts for the day,” Murphy said.

A Telstra spokeswoman told News Corp there was “no excuse” for the way her complaint was responded to.

“Clearly the interaction with Ms Murphy was unacceptable in this instance and this is not the experience that we want our customers to have,” the spokeswoman said.

“Our 24×7 social customer care team supports a large number of customers each day but this is no excuse for the response the customer received.”