On Monday night, Warner won the Allan Border Medal at the Australian Cricket Awards, a prize given to Australia’s top cricketer based on votes from teammates, umpires and the media. Perry took home her third Belinda Clarke Award as best female cricketer.

Due to print deadlines, The Australian’s editors were told earlier in the day that Warner and Perry would be taking top honours later that evening. Not having images of them receiving their medals, The Oz took separate images of the duo taken on the red carpet earlier in the night and photoshopped them together for its front page coverage. 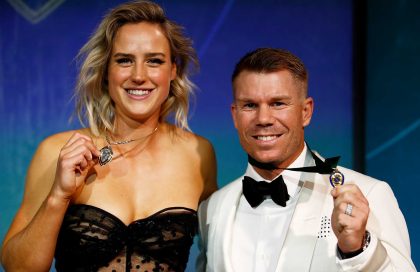 The cover image shows Warner towering over Perry when, in fact, Perry is markedly taller than the diminutive Warner.

The cover faux pas was soon called out by journalist Jess McGuire who tweeted: “The Australian fixed the proper order of things, man towering over woman, very good.” 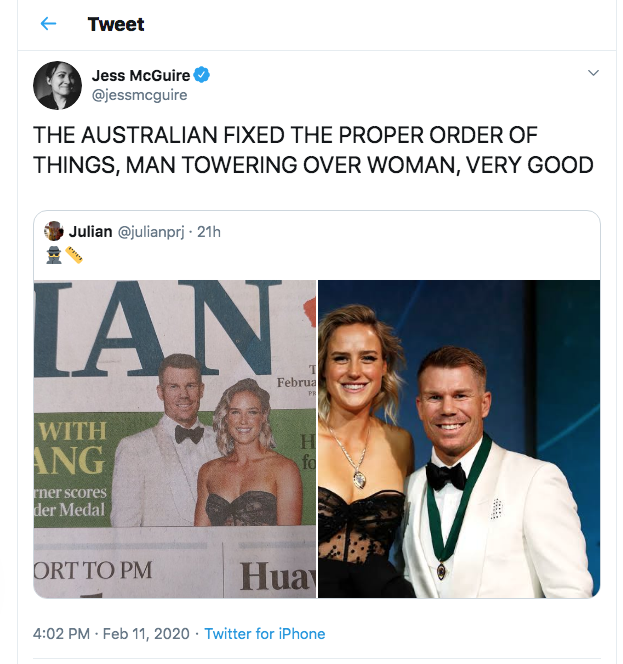 And, yes, an avalanche of News Corp bashing soon gushed forth.

“Imagine your masculinity being so fragile that you photoshop SOMEONE ELSE to be taller,” penned another.

While another tweeted: “Great to see that The Australian’s denial of objective facts extends to the existence of women taller than men.”

However, it wasn’t all hate. As another Twitter user pointed out, another Oz front page promoting its Oscar’s coverage showed a gigantic Scarlett Johansson dwarfing Al Pacino. 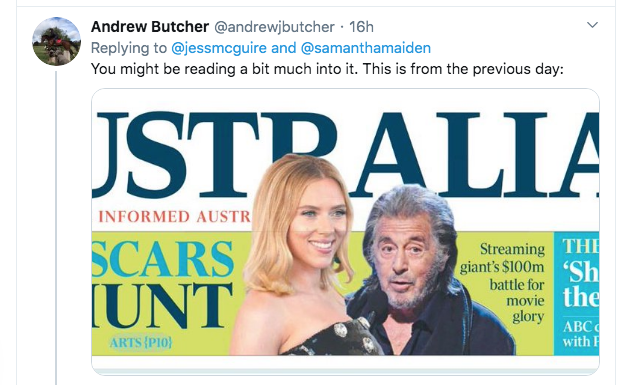 News Corp columnist Sharri Markson weighed in with, “These people who invent sexist scenarios in places where they are none are exactly why I hate Twitter.”

While News journalist Petra Starke commented: “Could be wrong, but my guess is they had embargoed info those 2 would win, got photos of each from red carpet at the start of the night & a designer made a P1 pointer for print deadline assuming “man taller than woman”? Not great perhaps but not a patriarchal conspiracy either?”

Not to be outdone, an editorial on News.com.au today has slammed the detractors calling them “social sleuths” who “missed the mark”. You can read it in full here.

Titled “Sorry, cricket gender conspiracy is fake news”, the lengthy tome was penned by News Corp sport columnist Jai Bednall who blamed it all on deadlines.

“[The Australian] was given the result of both medal counts in advance so it could get its pages to the printer in time,” Bednall penned in his employer’s defence.

“At that time, the artist only had a select group of images taken as the players entered Crown Palladium in Melbourne — and surprise surprise Warner walked in with his wife, Candice, while Perry arrived solo.

“When deciding how to arrange the two separate photographs, the artist would have placed Perry in front of Warner because he could etch cleanly around her shoulders. Warner’s left side was pressed up against his wife, so he was placed behind Perry. And the decision on how tall to make him? It likely wasn’t a decision at all,” Bednall wrote before finishing: “So sorry angry Twitter mob. There’s no conspiracy here, just more fake news.”