Advertise with us
Posted 5 February, 2019


Yesterday’s Super Bowl pulled its worst TV audience in over 10 years amid claims the game was dull, the half-time entertainment rotten, the ads were tame, and one of the teams didn’t deserve to be there in the first place.

Here in Australia, some 205,000 tuned in to 7Mate to watch the game. Although that doesn’t include anyone who watched the game in a pub or a club.

Also impacting numbers was an apparent boycott of the match by the entire city of New Orleans who are still smarting after their home team, The Saints, were apparently robbed of a place in yesterday’s Super Bowl following some dubious referring decisions in a previous match that saw them lose to the Los Angeles Rams.

New Orleans is considered one of the most gridiron obsessed TV watchers in the US, with previous data showing almost 53 per cent of residents watched last year’s Super Bowl. Yesterday, it fell to as low as 25 per cent. 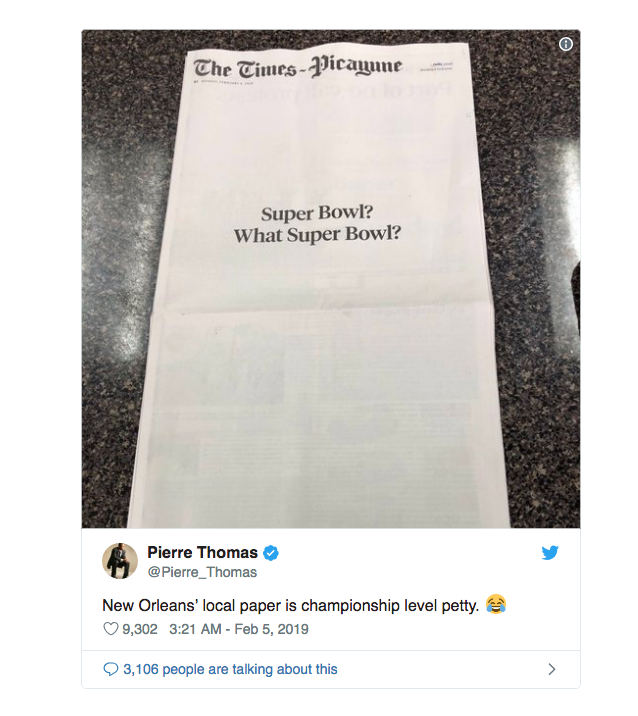 Such is the city’s anger, yesterday’s local paper, The Times-Picayune, ran a blank front cover with the headline: “Super Bowl? What Super Bowl?”

Instead of tuning in to yesterday’s game, some 3000 residents of New Orleans turned up to a “Boycott Bowl” concert in the city staged by the mayor, LaToya Cantrell. A number of Saints fans are also reported to have filed long-shot lawsuits against the NFL following the controversial result against the Rams.

And it seems like it was a case of sore losers all-round. In Kansas City – the team that lost to the New England Patriots – Super Bowl viewer numbers were down 11 per cent on last year.

There had also been media reports that fans had chosen to boycott yesterday’s game in support of Nike’s Colin Kaepernick, the former San Francisco 49ers quarterback who remains unwanted by any NFL team.

Kaepernick became a controversial figure in 2016 when he began kneeling during the playing of the national anthem to bring attention to apparent police brutality against the African-American community and other issues affecting minorities.