A new study has confirmed fears that Facebook is on the nose with teenagers who are abandoning the platform in favour of YouTube, Snapchat and Instagram.

The US Study by the Pew Research Centre (which you read it in full here) has found that Facebook use by American teenagers aged 13-17 has plummeted 20 per cent in just three years. 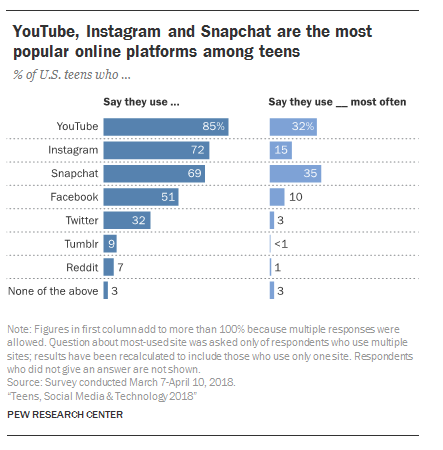 In 2015, a Pew study found that 52 per cent of teens used Instagram and 41 per cent used Snapchat.

When it came to social media and a teen’s happiness, the study noted that 31 per cent said it had a mostly positive effect, 24 per cent said it was mostly negative, but the largest share (45 per cent) said that effect has been neither positive nor negative.

The 2018 study also found that Facebook use was higher among lower-income teens, with 70 per cent of those living in households earning less than $US30,000 a year using it, compared with 36 per cent of those whose annual family income is $US75,000 or more.

“This shift in teens’ social media use is just one example of how the technology landscape for young people has evolved since the centre’s last survey of teens and technology use in 2014-2015,” the study noted.

“Most notably, smartphone ownership has become a nearly ubiquitous element of teen life: 95 per cent of teens now report they have a smartphone or access to one.