A new study into the trustworthiness of 30 different professions in Australia paints a bleak picture of the honesty of people working in the advertising industry, with adland voted the second least trustworthy profession, only slightly ahead of car salesman.

The annual Roy Morgan Image of Professions Survey asked ordinary Aussies to vote on the perceived ethics and honesty of each profession. Health professions topped the list, with nurses scoring a 94 per cent honesty rating. Sadly, most of the media professions languished in the bottom third. 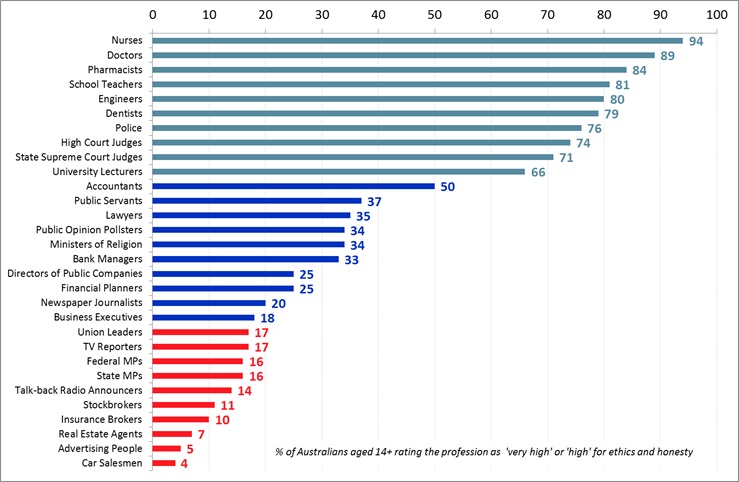 For the professions associated with media and advertising, public opinion pollsters were the most highly regarded with 34 per cent of respondents agreeing the industry had “high or very high ethics and honesty”.

In another blow for journalists, only 20 per cent of respondents said they believed the profession had high ethics. Up one per cent from 2016’s poll.

However, TV reporters ranked even lower than journos, coming in at 17 per cent.

The may make a mint, but it appears we don’t trust talk-back radio announcers, either. Only 14 per cent of us believed those behind the microphone were trustworthy, a drop of five per cent from last year.

How the media industries rated 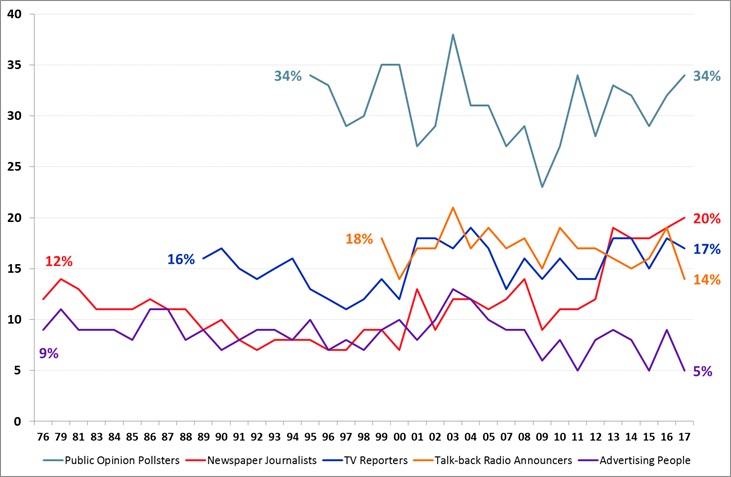 However, it was all bad news in the ethics stakes for adland, with only five per cent of people agreeing the industry was trustworthy. In more bad news for the perception of the industry, its ethics ratings dropped four per cent from last year.

Adland’s rating had it second last on the honesty charts, only a head of used car salesman who came in at four per cent. According to Roy Morgan, car salesman have come last in the survey every year since its conception back in 1976.

Commenting on the study, Roy Morgan’s CEO Michele Levine said: “The annual Image of Professions survey for 2017 shows 12 professions increasing their ratings for ‘ethics and honesty’ compared to a year ago, while 16 professions decreased and 2 professions were unchanged.

“For the 23rd survey in a row nurses 94 per cent (up 2 per cent from 2016) have retained top spot ahead of several other medical professions including doctors on a new record high of 89per cent (up three per cent) and pharmacists on 84 per cent (down two per cent).

“The biggest losers in 2017 were talk-back radio Announcers on 14% (down five per cent) and at their equal record low rating first achieved in 2000, stockbrokers on 11 per cent (down three per cent) and hitting a new record low and advertising people on five per cent (down four per cent). Only car salesmen on four per cent (unchanged) – a position they have held for over 30 years unchallenged as Australia’s least trusted profession – were lower.”