Advertise with us
Posted 1 October, 2019


New Roy Morgan data shows a greater proportion of women than men are buying vitamins, minerals and supplements. Almost half of Australian women (47 per cent) purchase these products in an average six-month period, compared to just over one-third of men (35 per cent).

According to the data, chemists (66 per cent) are the preferred place to buy vitamins, with supermarkets claiming 27 per cent of the market. 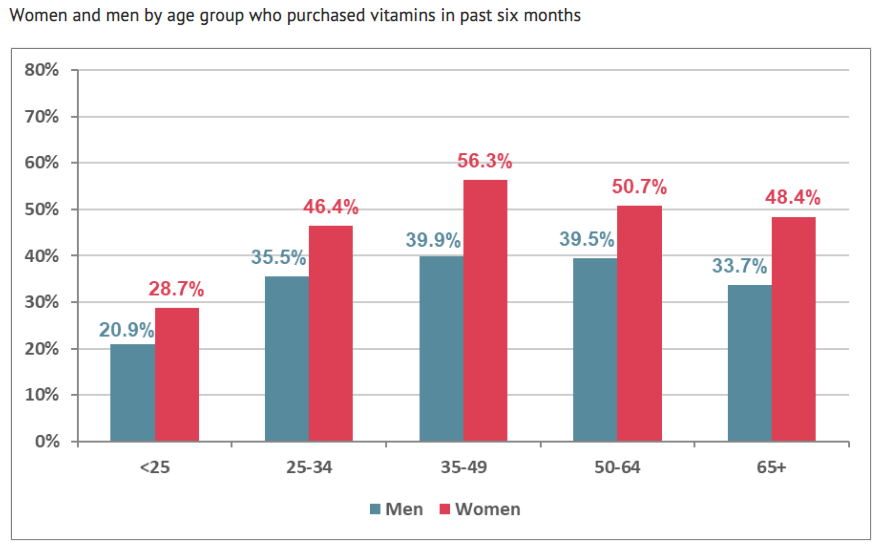 There are gender gaps around food and diet, too

The study also found that Australian women are taking better care of their health than men.

A total of 73 per cent of women say they actively try to get sufficient calcium in their diet, compared to 64 per cent of men — likely a reflection of women’s greater risk of osteoporosis, linked to lack of calcium.

When it comes to healthy eating, 29 per cent of women say they opt for a low-fat diet, compared to 25 per cent of men. And more women prefer to eat healthy snacks (68 per cent verses 57 per cent).

According to Roy Morgan, the quintessential vitamin, supplement and mineral buyer, is a woman aged between 35-49, living in New South Wales. She likely holds a diploma or a degree and is classed as a big spender in terms of her discretionary expenditure.

She is likely to belong to the Traditional Family Life Roy Morgan Value Segment, holding values centred around significant events in their personal and family lives. She tends to enjoy social events and being with other people. Compared to the average Australian, she’s more likely to attend theatre, concerts and hold dinner parties.

When it comes to shopping behaviours, she’s more likely than average to buy Australian-made products as often as possible, and to enjoy both grocery and clothes shopping. However, she’s less likely than the average Australian to buy a car based on its looks, or to buy a product simply because of the label.