New research by Roy Morgan has found that Australians are more likely to buy products across a wide range of industries if they know the product is made in Australia. Only a minority say the same about products they know are made in China.

The largest differences are for food, wine, skin care and cosmetics.

A huge majority, 88 per cent, say they’d be more likely to buy food if they knew it was made in Australia, while only six per cent say the same for Chinese-made food. The gap in favour of Australian-made wine is almost as large (72 per cent versus four per cent). 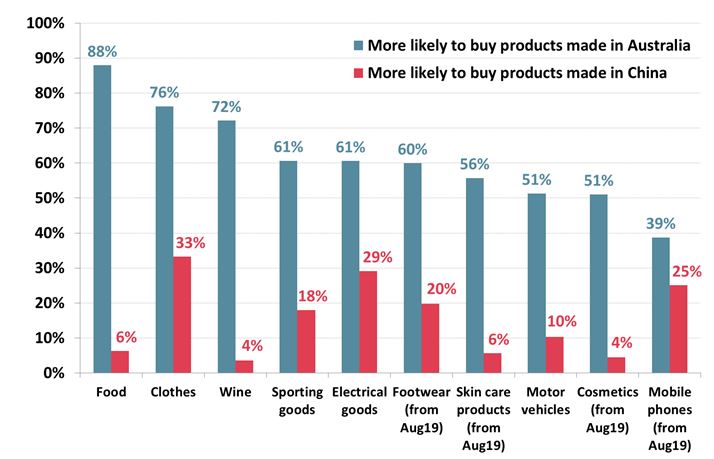 Chinese-made products with the best performance include clothes, electrical goods, mobile phones and footwear. At least 20 per cent of Australians indicated they would be more likely to buy these products if they knew they were made in China, although all trailed well behind Australian-made counterparts.

“These results are indicative of the domestic sentiment underlying the overall trade relationship between the two countries, which is heavily weighted in Australia’s favour. Australian exports to China (including Hong Kong) amounted to $150 billion in 2018, while Australia imported $82.7 billion in return: a trade surplus of almost $70 billion.