Sure, this isn’t strictly a media/advertising story, but it is about tattoos, and if there’s one industry that doesn’t mind getting itself inked, it’s adland.

However, a new study by YouGov has found that 48 per cent of Aussies view tattoos negatively compared with 43 per cent who have a more positive view of them.

But its the over 35s who are most likely to sport some ink. In fact, tattoos are most prevalent among those aged between 35 and 44 in Australia, nearly a third of whom (30 per cent) have at least one tattoo. In total just over a fifth of the population (22 per cent) have been tattooed. Body art is slightly more popular among women; a quarter (25 per cent) of women have them compared to 19 per cent of men.

13% of people have considered getting their tattoos removed

There is a similar divide between urban and rural dwellers; those in urban areas are far more likely (11 per cent) to believe that having a tattoo damages career prospects than those in regional areas (four per cent).

Yet Aussies don’t seem to regret their choices. Despite the boon of tattoo removal specialists, just 13 per cent of respondents have considered getting their tattoo(s) removed. All in all, nearly three-quarters of those with tattoos (74 per cent) are pleased to have them. 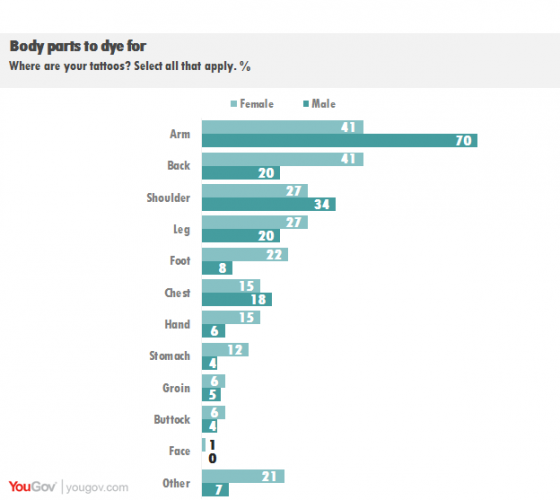 Arms are the most popular place to have tattooed

Across all demographics, the most popular spots to have tattooed are the arm(s) (54 per cent), back (32 per cent) and shoulder (30 per cent).