Advertise with us
Posted 4 January, 2016


Two shirtless men posing on posters on public transport in Amsterdam have drawn complaints from commuters, who deemed the ads “inappropriate”.

The UK media group for the gay and lesbian community, Pink News, reported the Advertising Standards Board had received a number of complaints about the ads from the app Squirt.

However, the Ad board in the Netherlands has deemed the ads not offensive, ruling in favour of the campaign, said Pink News. 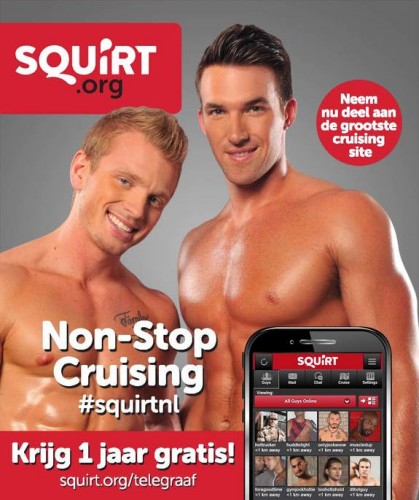 The ad on Amsterdam public transport. Image via Pink News

The same ad had been banned in Toronto, Canada, with claims the ad, which includes the word cruising (the act of looking for sex) is encouraging people to “break the law”. The ad in Toronto is the one at the top of this story.

The Toronto Transit Commission (TTC) had had at least ten customers complain about the ads.

“We’ve had two campaigns which have received complaints,” he told B&T. One was running on billboards just off Oxford Street in Sydney. Mulcahy describes the ads as two guys, torsos only, who were topless and close, but they weren’t kissing.

A complaint was received and Pink Media Group was notified by the Advertising Standards Bureau (ASB), the Australian ad watchdog, who gave the Group a chance to respond.

“We wrote in saying that it was two people of the same sex who were embracing,” explained Mulcahy, “but it’s nothing more provocative than you see on a Calvin Klein ad or your often see heterosexual couples going for it in advertising.

“So there should be no reason why two members of the same sex can be seen doing something similar.”

The ASB dismissed the complaint, ruling in favour of the campaign.

There’ll always be complainers, but when marriage equality actually becomes a thing, said Mulcahy, that’s when we’ll see a heap of brands really starting to show their support.

“And it will become a lot more common to see advertising targeted towards same-sex couples.”