Australia’s media agency market has kicked off 2018 in stellar fashion, with significantly higher advertising demand from a swathe of large product categories delivering a record level of February ad spend and the best ever start to a calendar year.

SMI’s agency data shows demand lifted 7.6 per cent in February to a record level of $544.8 million, which in turn pushed agency bookings for the first two months of CY2018 five per cent higher, ensuring ad spend for the two month period broke through $1 billion for the first time. 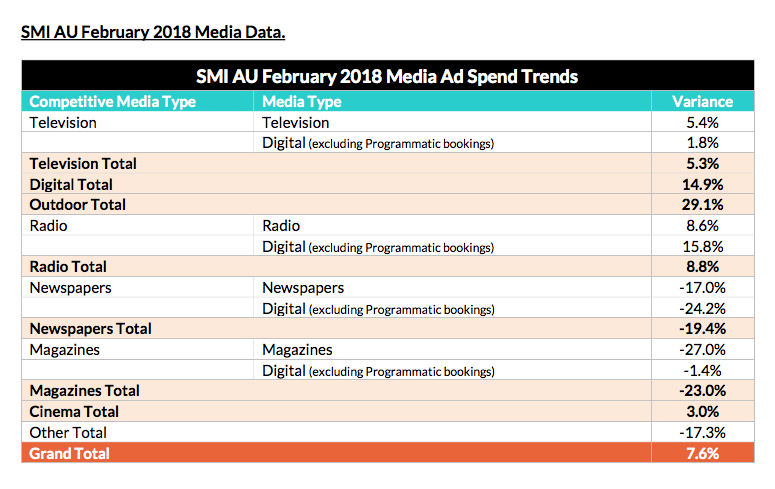 In February the digital, outdoor and radio media are all reporting record levels of ad spend for the month, with Outdoor delivering by far the largest growth (+29.1 per cent year-on-year without any lunar month issues). Television grew ad spend by 5.4 per cent to its best February result since 2015.

And the higher demand came from a broad range of advertisers, with eight of the market’s ten largest product categories reporting double digit growth in February. But the highest growth came from the Domestic Banks category which grew ad spend by 56.6 per cent year-on-year as they seek to mitigate the impact of the Financial Services Royal Commission.

SMI AU/NZ managing director Jane Ractliffe said this was by far the best start to a calendar year since SMI bookings began in 2007.

“Breaking through the $1 billion ad spend level so early in the year augers well for continuing demand, especially as we’re yet to see the extra ad spend related to the Commonwealth Games or other major sporting events due this year,” she said.

“It’s also pleasing to see such widespread support from many varied advertiser groups as even at the smaller end of the spectrum we’re seeing categories such as Analgesics lifting spend by 73% and Real Estate agents growing ad spend by 85 per cent from February 2017.”

This is also SMI’s first full data release provided at the end of the month and clearly shows the benefit of re-reporting all data at this time given the increasing lateness of media payments.

“It was clear when we released the interim February data two weeks ago that the market was exceptionally strong in February, but since then we’ve collected an extra $42 million in payments and that has provided an even more accurate picture of the true state of the ad market,’’ Ractliffe said.