Australia’s media agency market has delivered another month of stable advertising expenditure against a tough backdrop, with total ad spend back just one per cent to $665.9 million from last year’s record September result.

Last September a flurry of advertising related to the same sex marriage debate pushed ad spend to new highs, making the year-on-year comparison difficult for all major media. As a result, this month the only major media reporting double digit growth is outdoor (up 14.8 per cent). 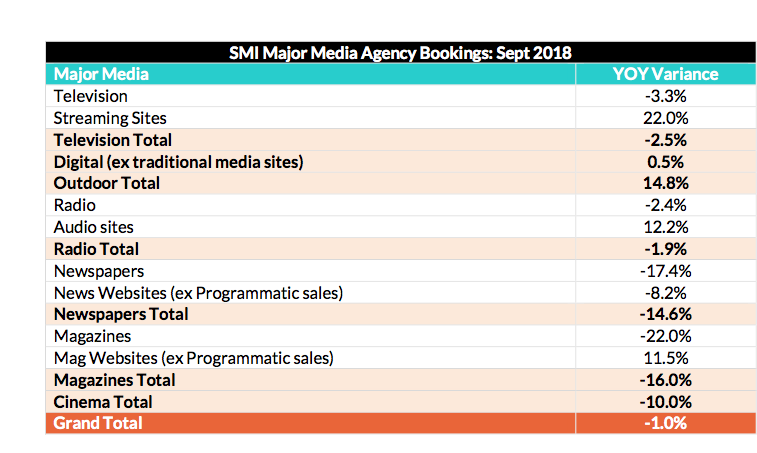 “This was the first month of 2018 in which we’ve seen a year-on-year decline in spending by the Domestic Bank advertisers, and they have been one of the key drivers of the record levels of ad spend we’ve seen this year given their higher level of advertising investment throughout the Financial Services Royal Commission,’’ she said.

“And there was also unusually soft demand from the gambling advertising market with those advertisers collectively reporting a double-digit decline in ad spend despite the month featuring the AFL and NRL Grand Finals.’’

In contrast the SMI data showed strong growth from automotive brand advertisers (up 22 per cent), the home furnishing/appliances market (up 7.3 per cent) and after a year of softer demand, the toiletries/cosmetics category returned to growth in September (+6.2 per cent).