The news came as SMI released the first combined view of the Australian and NZ media agency advertising markets, revealing the value of advertising inventory sold in both countries totalled $AUD8.1 billion in 2018/19 and to have grown by 19 per cent or $1.28 billion in the past 10 years. 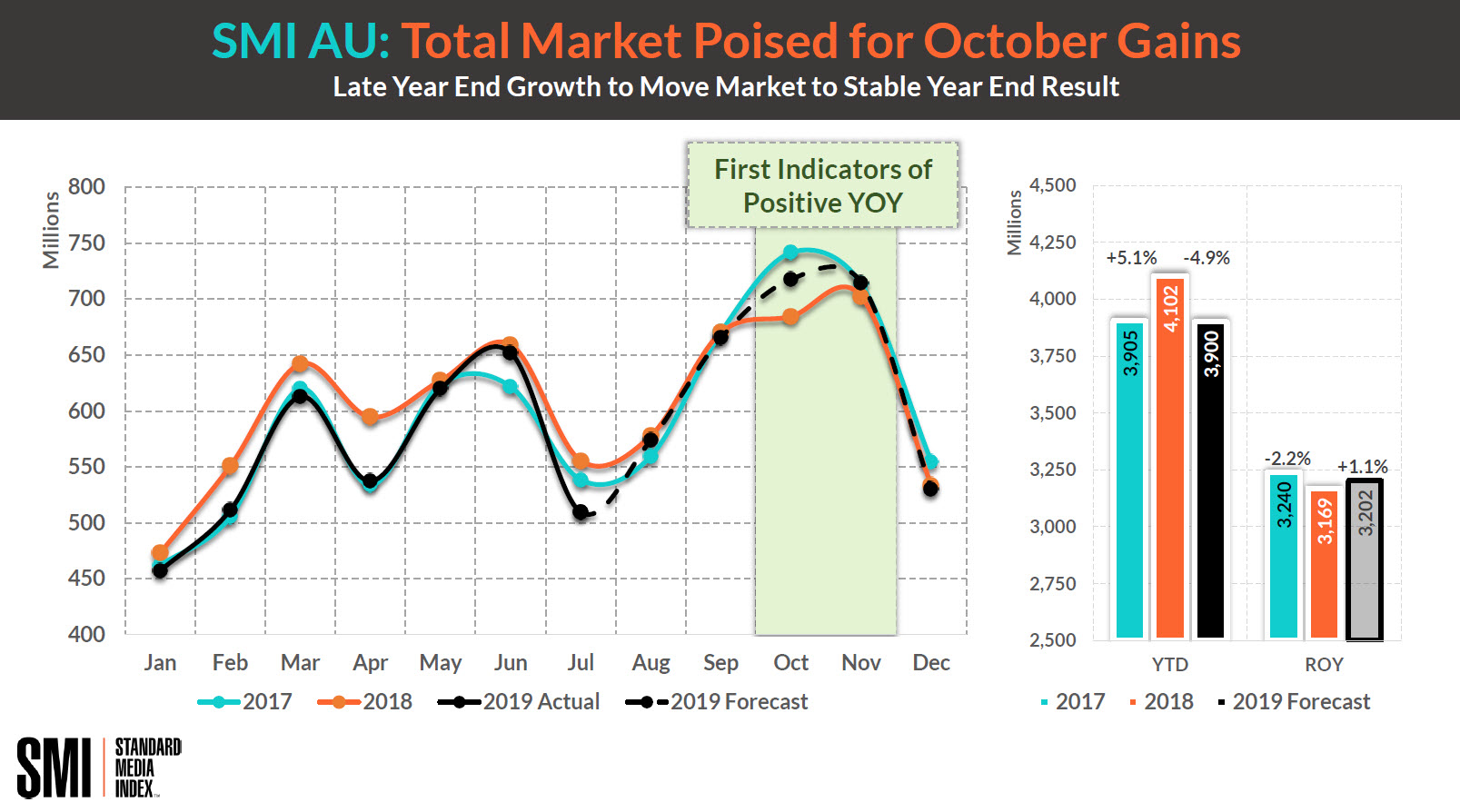 The figures were included in SMI’s first Trans Tasman Ad Spend report which was created to mark SMI’s ten year anniversary this month and was launched at an industry breakfast in Sydney today.

SMI AU/NZ managing director Jane Ractliffe said numerous advertisers invested in media in both countries, so the report was created as a key reference tool to make it easier for agencies and their clients to understand the changes in advertising demand and media share mixes across both markets.

“Of all the countries in which we publish ad spend data the Australian and New Zealand media markets are the most similar, but at any time there’s never complete uniformity so this report provides a top line view of the common trends,’’ she said.

And so far this year both countries are also reporting lower advertising demand for the first eight months of this year, with the AU market back 4.9 per cent and the New Zealand market back 0.5 per cent. In New Zealand, monthly ad spend fell for 12 consecutive months but has now moved back to growth in the past three months.

“It’s clear in our empirical data that extended periods of lower advertising demand are followed by strong bounces as business confidence recovers and pent up demand leads to bursts of above- average advertising expenditure,’’ Ractliffe said.

“If you look at SMI’s global ad spend data from 2010, in that year the US advertising market grew by 18 per cent, the UK market by 10 per cent, the New Zealand market by 11 per cent and the Australian market by 17 per cent as they all bounced back from periods of low demand.’’

Ractliffe said the Australian market was through the worst of the downturn having recorded 11 consecutive months of lower demand and next week’s final August results would lift that number to 12.

“So now the only question is when will the bounce-back begin, and our forecasts indicate that will happen before year-end and possibly as soon as October,’’ Ractliffe said.

“The recent tax cuts, an expected cut in interest rates and the fact that October 2018 was a month of weak demand (back 7.7 per cent on October 2017) all combine with SMI’s own forecasts to deliver a month of higher advertising expenditure,’’ she said.

SMI also released its first product category ad spend forecasts at the event which showed that of the categories spending more than 30 per cent of their media budgets in Q4 three of the largest – retail, home furnishings, clothing/fashion accessories and consumer electronics – were all likely to grow their Q4 ad spend against the same period last year.

The Trans Tasman Ad Spend report showed that in the past 10 years the greatest increase in combined AU/NZ ad spend has come from retail advertisers in both countries (up $299 million) followed by automotive (up $259 million) and then financial services/insurance (up $190 million).

“The report also highlights the speed of change within the media industries of both countries over the past ten years as advertisers within those categories continue to shift their ad spend across various media,’’ Ractliffe said.

“But as SMI sources its data from the Agency payment systems we’ve been able to keep the market fully informed as demand trends change.’’