Tennis superstar Serena Williams has been awarded the Sportsperson of the Year (formerly sportsman of the year) by Sports Illustrated, Williams is the first woman to be recognised with the honour as an individual since Mary Decker in 1983.

“Sports Illustrated honors her dominance in 2015, when she won 53 of her 56 matches, three of the four Grand Slam events and built the most yawning ranking points gap between her and her closest competitor in tennis history.

“We honor her, too, for a career of excellence, her stranglehold on the game’s No. 1 ranking and her 21 Grand Slam titles, a total that has her on the brink of Steffi Graf’s Open Era Slam record, which Williams will likely eclipse by mid-summer,” Sports Illustrated said in its feature article on Serena. 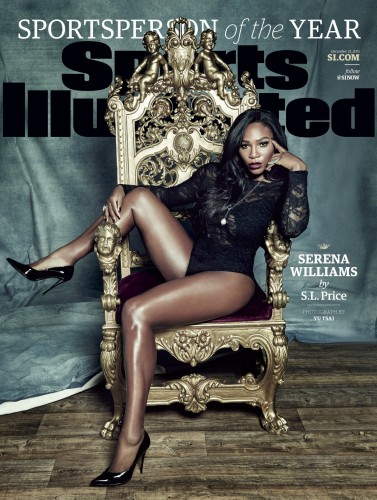 “Serena has made a very strong case as not only the greatest tennis player of her generation but of all time, and after the string of performances she put together in 2015, she is one of the most dominant athletes playing today,” said Sports Illustrated group editor Paul Fichtenbaum.

The magazine also honoured her influence off the court; including her impact on issues of race in America,  gender equality and equal access to education.

“This year was spectacular for me,” Williams wrote on Instagram. “For Sports Illustrated to recognize my hard work, my dedication and my sheer determination gives me hope to continue on and do better. As I always say, it takes a village, it’s not just one person. This is not just an accomplishment for me, but for my whole team. I am beyond honored.”

The cover? Serena’s idea, intended to express her own ideal of femininity, strength & power https://t.co/SySVOIbOxx pic.twitter.com/eGFCQWQtzq

Congrats @SerenaWilliams on being named @SInow Sportsperson of the Year! Girls everywhere are dreaming bigger because of you. -mo — The First Lady (@FLOTUS) December 14, 2015

Congratulations @serenawilliams. You’re a goddess and this cover is spectacular. https://t.co/McCedgxlJQ

Serena should have won this award for her return to Indian Wells alone tbh. — *Partition Beat* (@Brillianthony) December 14, 2015

I truly want to slap anyone who has an issue with Serena Williams’s GORGEOUS cover of Sports Illustrated.

A small minority of people are disappointed that a horse American Pharoah didn’t take out the award. The horse is the first Triple Crown winner in 37 years and he was won the online poll for the award.

@SInow @SI_ChrisStone @serenawilliams American Pharoah is the winner-hands down. You people are ridiculous. — Looise (@Looise1) December 14, 2015

Just spoke w/ American Pharoah. Ate oats the entire time, and then defecated on the floor. Wouldn’t even address #Serena by name. Shocking.

Sorry SI. #AmericanPharoah was more accomplished this year than Serena & he had the biggest impact on his sport in 40 years.He was deserving — Bob Ehalt (@BobEhalt) December 14, 2015

They can just tell American Pharoah that he won. He’s a horse, he won’t know the difference

Sports Illustrated had a fan vote on Sportsperson of the Year, and non-person American Pharoah came in first. Serena wasn’t in the top 10. — Michael David Smith (@MichaelDavSmith) December 14, 2015