Renegade independent senator Nick Xenophon has been photographed for the next issue of men’s fashion magazine GQ wearing a suit from Target and shoes from Lowes.

The outspoken senator, who appears to ignore any other issue in the country unless it happens to be about his home state of South Australia, went for a ‘James Bond’ feel for the shoot (although Daniel Craig should have nothing to fear).

Xenophon, who loves to play the ‘man of the people role’, refused to wear anything in the shoot over the $100-mark despite taking home a reported $200,000 a year salary as a senator (plus the innumerable benefits). Media reports say Xenophon had been shot for the cover, however, the publisher appears to have gone for Liam Hemsworth instead (see below). Xenophon regularly extols the fact that his suits cost less than 100 bucks and are bought off the rack from chain stores. However, it is at odds with his “buy Australia” mantra as, as some keen commentators have noted, the clothes he’s wearing are probably from third-world sweatshops. 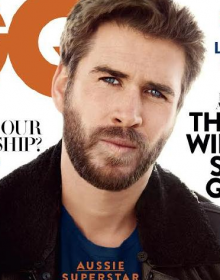 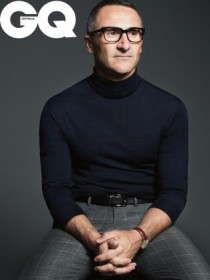 While Malcolm Turnbull appeared on the magazine’s cover in April last year as the then communications minister. The magazine allegedly bought in an old photoshoot for its spread and ran the images with the tag, “A man on the move, next stop The Lodge. Maybe”. 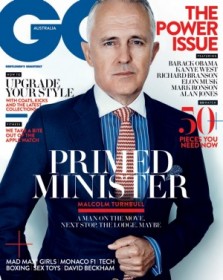 In the interview with the magazine – due out June 6th – Xenophon calls the now Prime Minister “very charming”.

“I wouldn’t say it’s a relationship. I’ve known Malcolm many years — we’re civil, but not close,” he revealed to GQ.

“I had dinner with him once when he was opposition leader and we came up with the alternative emissions trading scheme, which we launched in 2009.

“I wish it got traction because it was much better than the current clunky scheme. What’s not to like about Malcolm? He’s very charming,” Xenophon revealed.

Xenophon has launched his own party for the upcoming federal election and hopes to snare senators in other states outside of his home state of South Australia.