Following a successful launch in Melbourne earlier this year, Southern Cross Austereo (SCA) has announced it has formally expanded its client solutions concept ‘The Studio’ to its Sydney premises.

Wade Kingsley, head of SCA’s The Studio, was joined by an intimate crowd to celebrate the expansion, which included SCA executives as well as some of the network’s radio talent – 2DayFM’s Rove McManus and Sam Frost, and Triple M’s Merrick Watts. 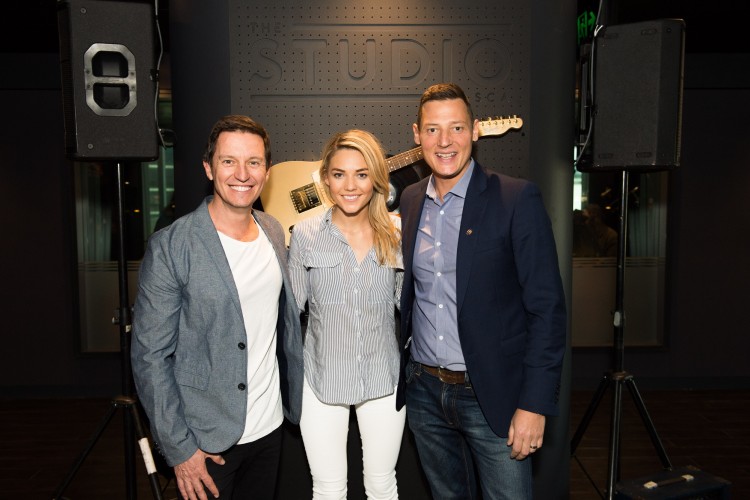 Rove McManus, Sam Frost and Merrick Watts at the Sydney launch of SCA’s The Studio.

“The Studio at SCA is a place where our creators collaborate with our clients to make multi-channel campaign ideas that deliver results,” Kingsley said.

“We’re thrilled to showcase our new space for The Studio in Sydney and look forward to working with our clients here in the future.”

The Hit Network’s Hamish Blake said The Studio concept allows he and his radio show co-host, Andy Lee, to be a part of the creative process directly with clients, and therefore have more engagement in delivering brand objectives.

“The most important attribute when you’re talking to an audience in order to engage them is authenticity – being genuine,” Blake said.

“If you don’t genuinely love what you’re doing or the idea you’re doing, it just stinks from a mile away.”

Myer’s general manager of brand and consumer strategy, Natalie Warren-Smith, explained that by using The Studio, the retailer experienced its most successful Father’s Day ever this year with a campaign held primarily across the Triple M Network.

“The campaign idea was ‘The gift for the biggest kid in the family’, so we worked directly with Merrick [Watts] who allowed us to bring that fun element to life,” she said.

“The thing that was unique about The Studio at SCA’s response was that they really took the time to do their research, understand the appropriate audience, the right talent to fit the job and then thought about how they could deliver that across a multi-channel experience rather than just a single radio response.