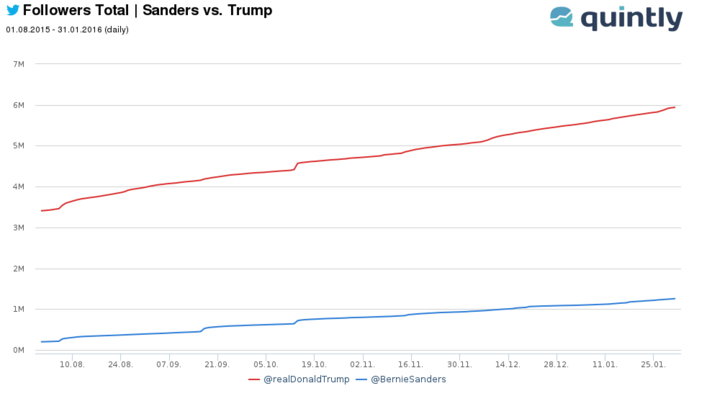 While Trump has more Twitter followers than Sanders, both their respective approval ratings within their affiliated parties are quite close. While the republican businessman comes to 35.8 per cent as of the end of January, the democratic senator could accumulate 37.3 per cent in the polls for the presidential elections 2016.

Tilo Kmieckowiak, a member of quintly communications team, said in a blog post: “We have seen that the number of followers and the approval ratings go hand in hand. There is a strong positive correlation. After every peak in the amount of followers, there is a peak in the ratings.

“So it could be assumed that social media is at least one aspect that is positively influencing the approval ratings.”

CEO and Co-Founder of quintly Alexander Peiniger said: “We are happy that we can help to improve the understanding of the links between political communication and polls through social media analytics. This is why we will continue to analyze these dependencies going forward until the presidential elections”