Australians’ love of the Royals shows no sign of diminishing anytime soon after 1.060 million of us tuned-in to watch Princess Eugenie marry her wine-merchant beau Jack Brooksbank on Seven on Saturday.

Yet, thankfully Aussie royalists were spared the embarrassing gaffe suffered by viewers of the BBC’s coverage in the UK.

As Eugenie stepped from the car at Windsor’s St George’s Chapel, a BBC commentator remarked, “What a beautiful dress”.

Sadly, however the network’s automated caption machine misheard the comment and, instead, subtitled it as Eugenie’s “beautiful breasts”. 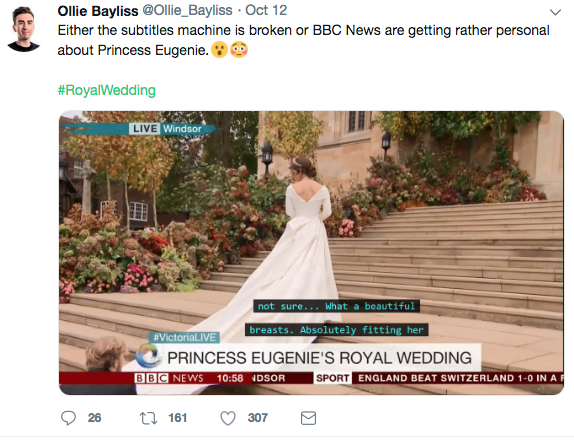 Eagle-eyed viewer Ollie Bayliss – a football commentator and journalist with the BBC  – quickly tweeted the blunder.

Bayliss posting: “Either the subtitles machine is broken or BBC News are getting rather personal about Princess Eugenie.”

A BBC spokesperson was quick to reveal that the gaffe was indeed the work of its misfiring voice recognition software.

“Our live subtitling service produces accuracy levels in excess of 98 per cent,” the spokesperson told the UK’s Express.co.uk.

“But, as with all broadcasters, there are instances – particularly during live broadcasts – when mistakes happen.

“On this occasion the voice recognition subtitling software made an error,” the spokesperson said.

And it’s not the first time the BBC has had to apologise for its faulty tech. During a recent rugby match between England and Scotland, a caption mistakenly read, “[International referee] Nigel Owens is saying penalty” as “Nigel Owens is gay”. Ironically, Owens is openly homosexual.

Still, he managed to see the funny side of things. “I must say I had a giggle when I saw this. I thought bloody hell this voice recognition is good,” Owen said after the on-air blunder.