In total, readership of print magazines is down 2.5 per cent from a year ago with 13.3 million Australians aged 14 and older reading them.

Australia’s two most widely read free magazines are continuing to perform well. Coles Magazine readership was up 3.1 per cent to 4,762,000 and Fresh readership increased by 1.7 per cent to 4,194,000.

Bunnings Magazine is the third most widely read free magazine and now read by 1,096,000 making the hardware retailer’s magazine one of only six read by more than 1 million Australians.

In addition, National Geographic marginally grew its print readership by 0.9 per cent to 1,286,000 while Australian Geographic was up an impressive 17.2 per cent to 675,000.

Super Food Ideas had the largest readership increase of the top magazines, up 39.5 per cent to 590,000. 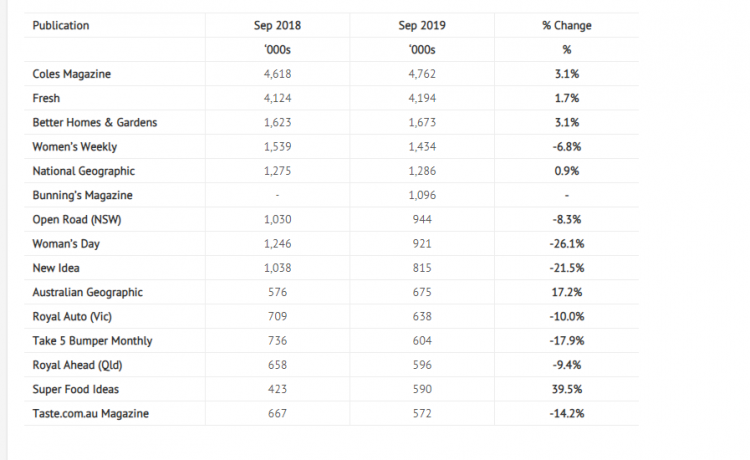 Women’s Weekly leads the category with a readership 1,434,000, although down 6.8 per cent from the royal wedding boosted high of a year ago ahead of Woman’s Day with 921,000 readers.

A larger readership via print than digital

A majority of Australia’s leading magazines (six out of the top ten magazines ranked by cross-platform audiences) have a larger readership via their print editions than their digital platforms.

The exceptions are Taste.com.au, Take 5 Bumper Monthly, TV Week Close Up and Good Health via the Now to Love online hub. 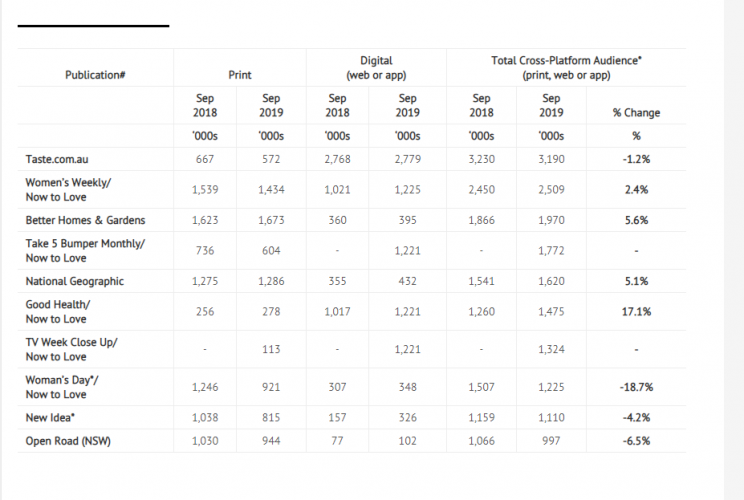 Roy Morgan CEO Michele Levine said:  “The latest results from the Roy Morgan readership survey shows Australians are still in love with their magazines with over 15.2 million Australians now reading magazines, whether in print or online, up by 88,000 on a year ago and equivalent to nearly three-quarters of the population.

“The enlarged Bauer Media has some tough decisions to make about whether to continue publishing several popular existing titles or whether to consolidate further in the period ahead. Key to understanding which magazines have a future is to analyse in detail the audiences of similar magazines to determine whether they’re read by the same people or diverse audiences.

“An impressive new magazine to be launched in the last year is the Bunnings Magazine for the popular garden and hardware retailer. The Bunnings Magazine has already attracted an audience of 1.1 million Australians making it one of only six magazines in Australia with a seven-figure readership.”