Dr Mathew Donald (pictured below) specialises in leadership, management and organisational change and is author of Leading and managing change in the age of disruption and artificial intelligence. In this guest post, the goodly Doc argues the robots are coming to your workplace and, he says, resistance should be futile…

The modern age is experiencing rapid technology advances that are beyond those experienced previously, yet a robot takeover has been predicted for over 40 years (Felsen, 1975) and yet remains elusive. 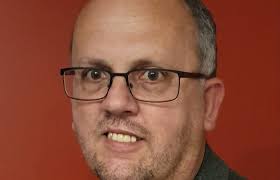 Emerging technology advances are proliferated quickly through the interconnectivity of knowledge, communication and trade, where change and improvement are common.

In just the past few years simple phones have advanced to location beacons, social media devices with apps and inbuilt cameras, each enabling algorithms to deliver a more sophisticated user experience. The interaction of location and data history now enables smart phones to prompt users on things they are likely to enjoy or want to buy (Gogolin & Gogolin, 2017).

The data involved in technology today may have exceeded the capabilities of humans (Crombez & Dahms, 2015), where some may argue that artificial intelligence (AI) is the most appropriate way of handling this sophisticated data. Some AI solutions may soon even include games (Parnas, 2017), yet the presence of AI does automatically lead to a robotics proliferation. A robot may need to have AI intelligence to be in a position to handle complex situations, yet the robot also needs location accuracy with a degree of mobility and technique.

Driverless cars are already being developed and being pre-purchased in significant volumes (Gibbs, 2017) indicating that some believe that the removal of human capability may be advantageous and marketable.

In recent times we have already seen apps make inroads into the taxi and hotel markets, where barriers to entry have been significantly reduced and costs lowered. Organisations of all types will likely move to AI and robots once there are cost advantages, customer service or financial or competitive advantages. The first to reduce staff and take on robots will likely take on a high risk of failure or rejection by customers, yet when advantages present many may take that risk despite the failure risk.

Some may argue against robots on ethical or convenience grounds, yet once a robot can deliver something more efficiently or at a reduced cost the hostility may not be so great.  Robots will likely replace work rather than create it in the initial phases (Needleman, 2017), whilst new work and new industries may emerge at some point along the journey (Donald, 2019). Robots are unlike their AI counterpart, as robots have physical form and presence, where they have potential to harm as well as do physical things. Robots are likely to be excellent with routine tasks, performing without the variation that human equivalents may have. Key to any robot emergence is that of location recognition and safety.

Robots need to have abilities to avoid running into things, ability to avoid human harm and contact as well as being able to handle unforeseen conflicts across their path.

With the advancing AI of today, the new higher-level communication software tools in mobile phones and media, it is quite likely that any robot mobility issues will be solved relatively soon.  Numerous development organisations exist that are focused on the physical operation and capability of robots, so instant or relatively quick robot emergence appears to be set. Organisational leaders should perhaps urgently commence preparation for a robotic emergence. Some argue that a disruption register (Donald, 2019) with preparation for action should be developed now for all the possible rather than probable events in a disruptive environment, that register should probably include robotics.

Inhibitors of robotic proliferation are likely to be ethical, societal and safety, where some may argue that placing millions of people on unemployment lists is irresponsible or counter-productive to a coherent and functioning society. Recent history has shown that countries and organisations have taken the benefits of globalisation despite the reduction in jobs across many industries and regions.

There is a high need for politicians and planners to consider the widespread unemployment that could emerge quickly from a robotic evolution, there are flow on issues regarding tax collection, mental health, unemployment costs and social disquiet. If robots emerge quickly with large scale job losses, the incomes of those remaining in work may be distinctly different and higher than the millions that could potentially be left to government handouts.

Organisational leaders will have additional challenges once the work place is replaced with robots, as the jobs left will need particular skills involving analysis, data, problem solving, where each will involve less people interaction than now. Those that like or need regular human interaction may find this new environment difficult to work in. Staff may directly resist and inhibit the proliferation of robots if they are worried about unemployment, reduced pay, changed job functions or the prospect of retraining.

If staff resist robot introduction there may be prolonged disputes, negotiation over terms and retrenchments, where some organisations may delay their introduction due to these concerns. Other concerns about robots may be ethics and safety, especially if there is potential for human harm, especially where there may be high human interaction like medicine, nursing or policing.

Robots are unlikely to be able to do all of the new associated work; this will be due to physical or AI limitations. In this case there will be opportunities for staff to do the tasks, physical and software, where the robot cannot do the task. There is potential for tradespeople that may now be maintaining machines and vehicles to transform those skills into robot part maintenance and repairs.  There will likely be many software versions and upgrades in the early phase of any robot rollouts, these will be fertile grounds for software developers and integrators.  For those that can transform and translate their current skills, opportunity may present so reducing any potential to be left unemployed in this new age.

Of course, there will be some industries and organisations that may seek to oppose the trend to robots, in some cases they may successfully build niche businesses that keep high human ratios and find customers willing to pay for the service. On balance the robotic revolution appears to be on the brink, where significant changes in organisational composition and social upheaval may be imminent. The organisational leader, together the social planner and political leader, perhaps should urgently be considering how best to accommodate this imminent robot emergence.