Who would have thought the image of a topless woman on the back of a bus, holding a sign exclaiming ‘Ride Me All Day For£3’ would have caused a wee bit of controversy?

Well, over in Wales in the UK a bus company has faced this very situation, and has been forced to pull the ads amid a flood of complaints and social media uproar.

The tweet from the company behind the campaign, New Adventure Travel (NAT) Group, announcing the ad has since been removed, however The Daily Mail has secured a screenshot of the tweet, below. 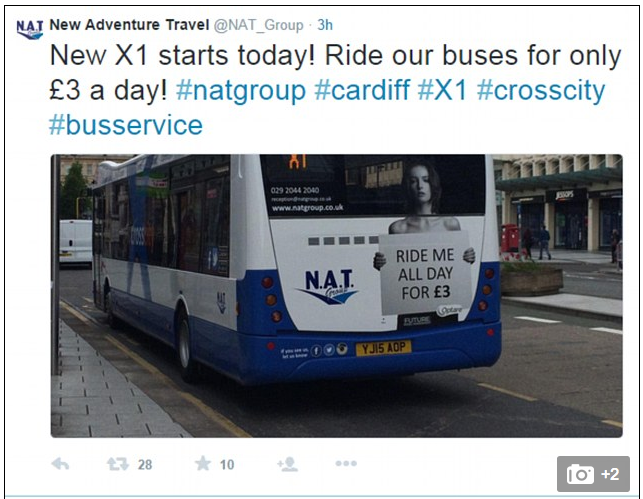 The ads were launched in the hope of attracting a younger generation onto the public people mover, according to NAT Group. Both male and female models were included in the campaign.

However, unsurprisingly, the ads were not favourably received.

Amazed the @nat_group ad got through any sort of screening process… Both ads actually. Worth remembering they objectified both genders

@charlottechurch @NAT_Group If a man said similar thing to a woman he would rightly get arrested and charged. How is this ok on a bus?

This is outrageous. Couldn’t @NAT_Group find a single person of colour to advertise their buses? #Racism pic.twitter.com/ctO6u795PM

Hey @NAT_Group THIS IS ABHORRENT! You should remove these hugely offensive ads ASAP pic.twitter.com/EphM8N8xyI” Please complain and retweet.

However, some didn’t find the ads offensive at all.

@NAT_Group There was nothing wrong with your ads, it’s a shame people don’t lack humour.

“Ride me all day for 3 pounds?” @NAT_Group how *dare* you have a sense of humour and post a sexy ad? 😉 what is the world coming to?

@NAT_Group I thought the campaign was hilarious. I love good sexual innuendo – keep it! #RideMeAllDay #whysoserious

Bargain. Sad to see @NAT_Group receive so much attention from overly vocal reactionaries with no sense of humour. pic.twitter.com/dlt0mszhH4

The company has since released a statement apologising for causing any offence.

The full statement is below.

“In view of the reaction to our bus advertising today we wish to set out our position:

“Firstly we have stated that our objectives have been to make catching the bus attractive to the younger generation. We therefore developed an internal advertising campaign featuring males and females to hold boards to promote the cost of our daily tickets.

“The slogan of ‘ride me all day for £3’ whilst being a little tongue in cheek was in no way intended to cause offence to either men or women and, if the advert has done so then we apologise unreservedly. There has certainly been no intention to objectify either men or women.