Typically staid and demure department store, the UK’s Marks & Spencers, has found itself in a spot of Christmas bother after a festive window display was called out as sexist and “vomit-inducing”.

The display appeared at at its Nottingham store and featured Christmas “must-haves” in the shape of suits for men and “fancy little knickers” for women. 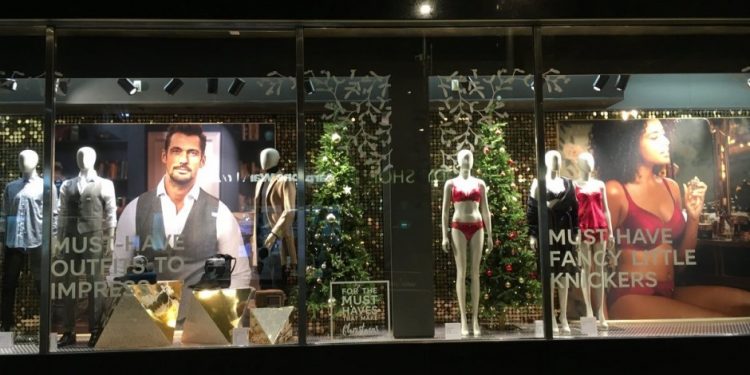 The suits are modelled by famed British model David Gandy, while the underwear is worn  by mannequins and images of a unknown model.

And the social media backlash was swift with the display being labelled “grotesque” and “vomit inducing”.

Someone even changed the wording on the store window to read, “Must have fancy little full human rights”. 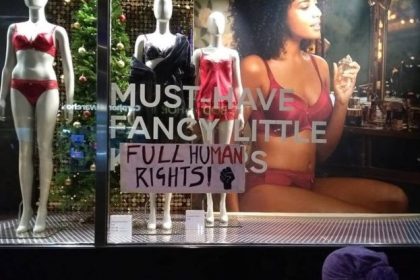 The window display was originally called out by Nottingham local, Fran Bailey, who told the BBC: “I think M&S using the slogan ‘must-have’ over Christmas fripperies is very distasteful when true necessities are lacking for many working and non-working people; the true necessities being warmth, shelter and food.

“I also feel very, very strongly about the representation of women as being preoccupied with fancy little knickers, whereas men are presented as powerful and needing to be impressive.

“I don’t have a problem with people choosing to wear whatever they want to wear, I just feel like the juxtaposition is what’s grossly, grossly offensive.

“We are surrounded by sexual images of both men and women. M&S are not by any means the only offenders but that particular window just epitomises everything that’s wrong with current marketing and how far backwards we’ve gone.”