Again, due to legal reasons B&T cannot repeat the tweet that has since been deleted. 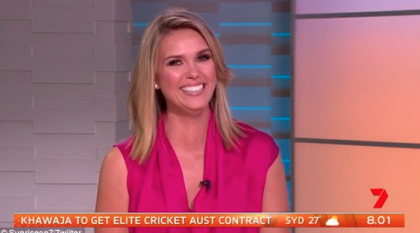 Initially, it was reported that Seven bosses thought the whole thing a joke, but apparently are now realising the seriousness of Nine’s and Costello’s threat to sue. A Seven spokesperson telling The Sunday Telegraph that its rival was “bluffing by saying they will take legal action”.

It has also been reported that Bartholomew’s tweet was intended for a friend only and not for the wider public. Bartholomew has 60,000 Twitter followers.

The venerable Daily Mail is this morning quoting a “Seven source” (the network has rejected B&T’s overtures for comment) as saying management is “sympathetic” to Bartholomew and “will continue to back her 100 per cent”.

The source adding: “Edwina is mortified about what happened and has apologised to Seb personally.

“She is a kind-hearted person who made a mistake. She works hard and has been filing stories from a different time zone while also dealing with jet lag that comes with flying to London and heading straight to work.”

Bartholomew is currently on assignment in London and blamed the tweet on late-night jet lag. The offending tweet was deleted about an hour later following “frantic calls from people at Seven”.

For his part, Costello – who is the son of the former treasurer and Nine chairman, Peter – has stated that he has consulted lawyers regarding his next move.

Costello telling Triple M’s Hot Breakfast radio show: “It’s not ideal what was said, I spent the weekend with family and it’s not ideal for them either.”

Yesterday, a Nine spokesman told B&T in a statement: “Seb and Nine are devastated and shocked at the damaging and false nature of this personal attack on a public platform.”