In a first for the brand, Red Rooster’s latest campaign took to the popular dating app Tinder, integrating the swipe function into its advertising and targeting customers in a whole different way. Red Rooster’s new campaign features saucy male and female Tinder profiles promoting the brand’s new range of saucy wings and has proved quite popular with the online dating community. 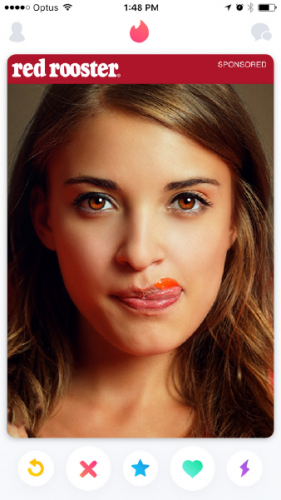 A look at the results and a breakdown of data from Tinder reveals an enormous divide in the swiping habits of males versus females.

The engagement rate amongst males on Tinder averaged at around 25 per cent while for women it was substantially less at an average of almost two per cent.

Showing stark gender differences (and following in the same vein as numerous international studies and experiments), Red Rooster’s first foray on Tinder clearly shows that men are a lot more right-swipe happy than women and that they’re not too choosy about who they swipe right for. However, they’re rarely invested enough in person to actually send a message.

By contrast, it appears that women only swipe right when they’re really interested and are more likely to follow through with their initial choice.

Does this mean that women are more eager to find true love, more serious about dating or just hungry for some saucy chicken wings?

The Tinder app sees millions of guys and gals collectively swiping 750 million times per day – offering not only plenty of opportunities connections to be made – in every sense of the word!