More proof she didn’t, in fact, do it for the money comes news today that defamed actor Rebel Wilson will donate her entire payout from Bauer to charity, scholarships or the local film industry.

News of the potentially very generous gift comes amid reports Bauer may have to stump-up as much as $7 million to Wilson and her legal team and follows yesterday’s news of Bauer CEO, Nick Chan, sudden departure from the publisher.

It’s not entirely clear if Chan’s departure was a direct result of the Wilson case, with The Australian today reporting, “Chan left after he and Bauer’s German owners could not agree on strategic priorities for the Australian business”.

Last night Wilson, who has since returned to the US following her defamation victory, tweeted any money she did receive would “go to charity, scholarships or invested into the Aussie film industry to provide jobs”. 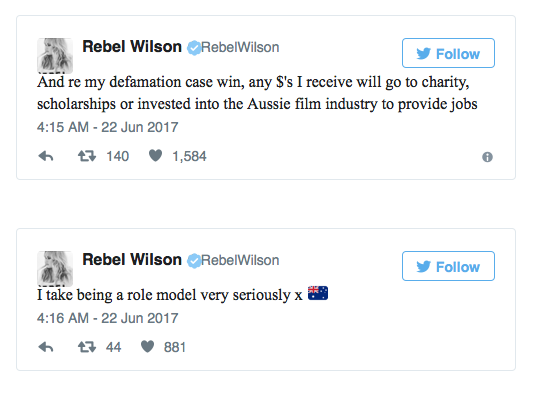 Both Wilson’s and Bauer’s lawyers are now battling it out in the Victorian Supreme Court to decide on a final pay out. It’s been reported the settlement may take as long as two weeks to decide.

Yesterday, Wilson’s lawyer, Matthew Collins QC, told the court that Wilson could’ve made up to $18 million from blockbuster film roles had the articles had not damaged her career. Wilson is said to be seeking $5.89 million in special damages and $1.2 million in general damages.

If successful, Wilson’s payout would be the highest payout for a defamation case in Australian legal history.

Hollywood agent Peter Principato yesterday appeared via videolink and told the court Wilson should have received a minimum of two movie offers after her success in the film Pitch Perfect 2, and would have commanded around $6 million for each of those films she missed out on.

“Wilson was one of those actresses where every studio was talking about and trying to find projects for her,” Principato said.

Bauer Media’s barrister Georgina Schoff QC will make her closing submission on damages tomorrow, while justice John Dixon is expected to take several weeks to determine the amount of damages.