As Rebel Wilson celebrates her Bauer defamation win, the actor’s lawyers are now trying to convince the judge the damages payout should be in the seven-figures and not six.

However, the biggest loser in all of this may well be the women’s gossip magazines who’ve long published unsubstantiated rumours and “insider” gossip which will have the publishers’ lawyers very nervous following last week’s verdict.

Wilson’s lawyers begin their submissions in the Victorian Supreme Court today to determine the amount of compensation.

If Bauer are found to have only damaged Wilson’s reputation then most pundits predict a payout of $250-$500,000 including court costs.

However, if, as Wilson claims, the articles did indeed cause her to lose major Hollywood movie roles then the payout could well be in the many millions of dollars.

According to news reports, Wilson has even brought in a Hollywood agent to testify that the Bauer articles saw her lose roles in Kung Fu Panda 3 and Trolls and a million-dollar pay cheque.

Meanwhile, other Aussie celebrities who claim they too have been victim of salacious articles in the likes of Women’s Day have come out in support of Wilson and her court action.

Delta Goodrem, a regular of the women’s mags said: “A lot of people in the industry were watching this case with interest. To see Rebel stand up to bullies has been an incredible to watch. She’s made a really important moment happen in Australia,” her comments reported on News.com.au.

“It’s become relentless. I’ve had so many baby shocks and engagements, some of them you just have to laugh off. But you get these stories trying to wreck your career and your professional reputation,” Goodrem said.

Other celebs too tweeted their support, even Shane Warne adding: “Woman’s Day has been a disgraceful magazine for a long time, hopefully this makes them report facts & stops the rubbish.” 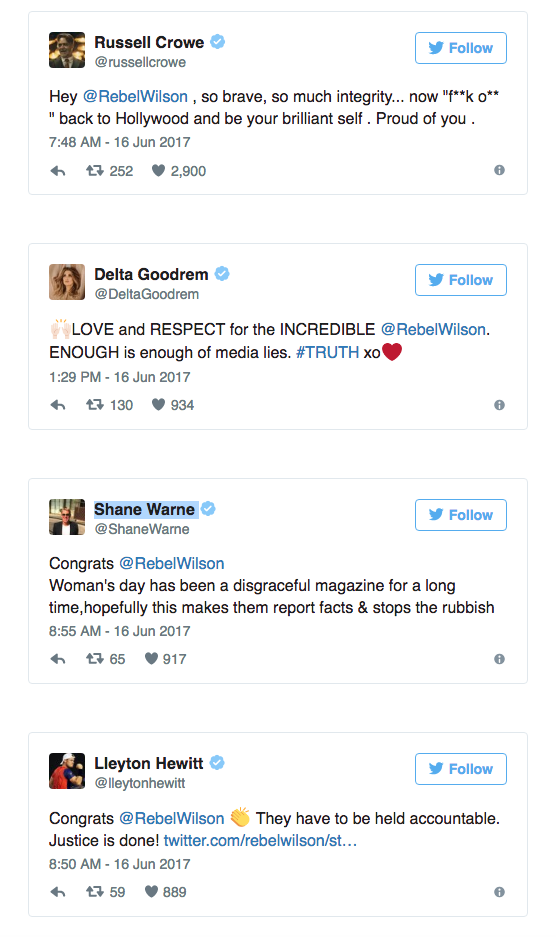