A New Jersey single mum is so proud of her son she has hired a billboard to celebrate him graduating.

Single mum Ovella O’Neal was so stoked about her 18-year-old son’s upcoming graduation that she has hired a billboard in the family’s neighbourhood to celebrate. The billboard has a huge smiling photo of her son Aljelani ‘AJ’ Igwe and the quote “A mother can’t raise a man, but I raised a Gentleman. We have the total package.” 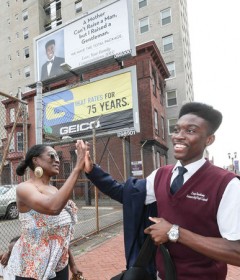 O’Neal told local newspaper, The Philadelphia Inquirer, that the secret to AJ’s success was strict parenting: no mobile phone, no girlfriend and back home before dark.

“We, as parent,s have to be a prime example for our children,” O’Neal said. “When they leave from under our nose, they should represent you [and] their upbringing.”

“He’s just been a super kid,” she said. “If I could clone him and put him in every home. … He just listens.”

In high school, AJ kept a strict schedule. He woke up at 7am for school. After classes ended at 4pm, he headed to the Boys and Girls Club of Camden, where he volunteered to clean and help the younger kids with their homework, and then to basketball practice.