The study suggests marketing efforts of private health insurers only contribute to churning customers between funds rather than attracting the uninsured, with one in three Australians having little or no insurance cover.

The survey found private health insurance only had a “medium priority” after car and home insurance, but before life and income protection.

While every second respondent overall considered private health insurance “very important” or “essential”, a quarter of people with private health rated their cover as “only somewhat important”.

Kelvin Kirk, managing director at Pureprofile, said: “The data indicates a large number of the Australian population is still not convinced private health insurance is worth it and are likely to discontinue their cover.

“Private health insurers have a lot of work to do to convince people to take up insurance, but it seems the millions spent on advertising by health insurers each year only appears to prompt existing customers to switch rather than winning new clients.”

Kirk said this was backed up by recall of TV advertising and other media, which was higher among people who already had private health cover. People with no cover had little or no recollection of private health insurance TV ads.

“It is surprising that more isn’t being done to win new customers, as the data tells us there is a real opportunity for private health insurance providers to focus on demonstrating the benefits of membership to people who don’t have cover, especially younger customers,” he said.

“This was illustrated by the fact most surveyed had little idea how expensive it was to spend a night in hospital.

“Private health insurers have an opportunity to educate customers about the potential costs of not having cover. Most people think Medicare will pay for everything, especially those without health cover.”

The report also revealed that the private health insurance market is concentrated among two large brands – Bupa (26 per cent) and Medibank Private (24 per cent).

Both operate strongly across all states, while the brands following are HCF (16 per cent) and NIB (13 per cent), and are particularly strong in NSW. 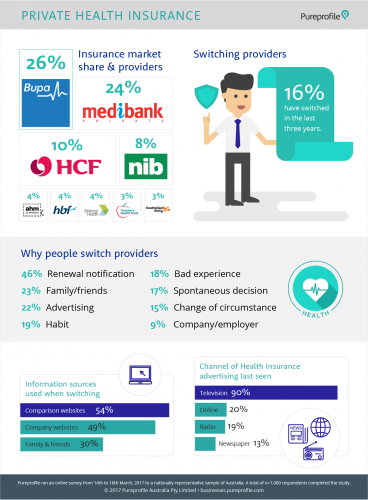 The study also found that 16 per cent of all Australians have claimed to have switched private health providers in the last three years. Among current PHI owners, this share increases to one in four.

Customers are more likely to switch providers in their first five years of membership with a brand (70 per cent have a tenure less than six years).

Nearly every second switch (46 per cent) was prompted by the renewal notification. One in five customers switched after habitually looking for a better plan every year. Comparison websites like iSelect, choosi and Compare the Market are used by 54 per cent of all switchers, and an insurance provider’s online presence also plays a big role in searching for a better deal.

According to the study: 48 per cent of people under 35 years rely on word of mouth and the opinion of friends and family when switching, while very second Australian recalls recent advertising for private health providers.

Cut-through is highest for women (54 per cent) and 18 to 34-year-olds (55 per cent). TV is the most effective channel, responsible for 90 per cent of total advertising recall.

Mobile ads have little impact, with only five per cent recall in the general population, but enjoy a higher recall among 18 to 24-year-olds (14 per cent).

“The findings indicate an opportunity for marketers of health insurance to tap into mobile ads targeted at the younger audience,” Kirk said.