Advertise with us
Posted 7 December, 2015


Pretty Shady, the brand that encourages young Australians to help stop skin cancer one summer at a time, is back for its third year.

Created by Soap Creative in collaboration with UM and Holysmoke! for the Cancer Institute NSW, the integrated campaign builds on the success of the previous two years in shifting audience attitudes towards the importance of sun safety.

The summer 2015/16 campaign launched with a collection of five brand videos, directed by Josh Logue, that show a wide reflection of the NSW regionwhile delivering a very serious message in an attention grabbing way that appeals to teens and young adults.

A sixth video, capturing the generation of youth supporting the Pretty Shady movement, will be released in 2016.

In a salute to the old-school ‘lucky grab’crane arcade game, the custom-built JCDecaux Citylights dispenser panel –installed at Bondi Beach –is operated by a mechanical claw.

The unique dispenser mechanism is designed to grab the attention of passers-by, playfully engaging them with a serious sun safety message. 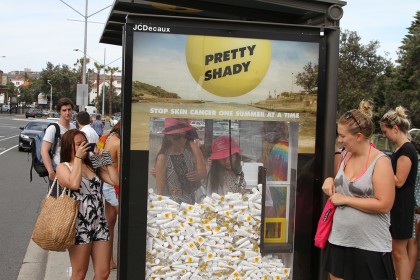 Bus-shelter wraps, including custom roof panels, have been installed throughout the CBD and summer hot spots to provide Sydney commuters with shelter from harmful UV rays and help to raise awareness of the ‘Pretty Shady’sun smart message and overall campaign aim to stop skin cancer, one summer at a time.

“Out of Home is now more than ever, an active medium that provides unique engagement opportunities that deliver real results,” JCDecaux head of creative solutions Alan Klein said.

“The Pretty Shady activity is the perfect example of how OOH can deliver a real value exchange by providing tangible benefits to those who engage or come into contact with the campaign. ”

In addition to the videos a new Pretty Shady fashion collection has been launched featuring five fashion forward items that protect you from the sun – shade, clothing, hats, sunglasses and sunscreen – all available at www.prettyshady.com for the price of a social mention.

In total, over 5000 Pretty Shady products will be distributed before Christmas, including this year’s limited edition t-shirts, which feature UV-activated ink.

Other channels this year include interactive OOH sites, a partnership with The Iconic and an extensive blogger outreach program.

Pretty Shady will have an active presence at key summer festivals, including Festival Of The Sun, Laneway Festival and Bowl-a-Rama, plus the brand has also engaged Safe & Sound to work with legendary Australian DJ/Producer Kid Kenobi to create an original track for the campaign, available as a free download late January 2016.

They will all help spread the important message, together with a range of influencers across all major social platforms.