In this article taken from The Atlantic, Ethan Zuckerman, director of the Center for Civic Media at the Massachusetts Institute of Technology (MIT) and the principal research scientist at MIT’s Media Lab, questions what it will take to design socio-technical systems that actually work.

I found Shane Snow’s essay on prison reform – “How Soylent and Oculus Could Fix the Prison System” – through hate-linking.

Friends of mine hated the piece so much that normally-articulate people were at a loss for words. 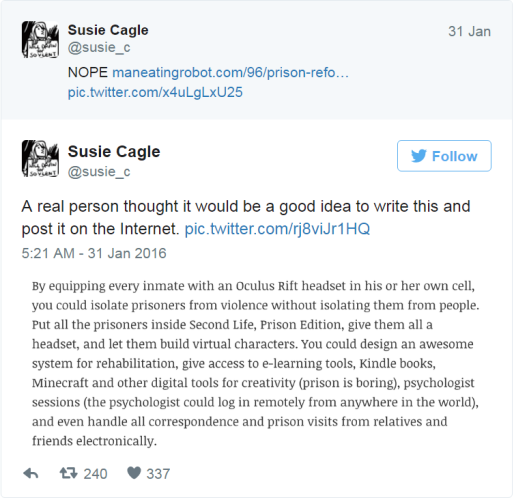 With a recommendation like that, how could I pass it up? And after reading it, I tweeted my astonishment to Susie, who told me, “I write comics, but I don’t know how to react to this in a way that’s funny.” I realized that I couldn’t offer an appropriate reaction in 140 characters either. The more I think about Snow’s essay, the more it looks like the outline for a class on the pitfalls of solving social problems with technology, a class I’m now planning on teaching this coming fall.

Using Snow’s essay as a jumping off point, I want to consider a problem that’s been on my mind a great deal since joining the MIT Media Lab five years ago: How do we help smart, well-meaning people address social problems in ways that make the world better, not worse?

In other words, is it possible to get beyond both a naïve belief that the latest technology will solve social problems—and a reaction that rubbishes any attempt to offer novel technical solutions as inappropriate, insensitive, and misguided? Can we find a synthesis in which technologists look at their work critically and work closely with the people they’re trying to help in order to build socio-technical systems that address hard problems?