An out-of-home campaign that urges people not to give money to homeless people has caused just the outrage you’d expect.

The poster campaign asks “Are you really helping the homeless?” and infers that many people who beg for change aren’t, in fact, homeless at all and are taking money from people who are. 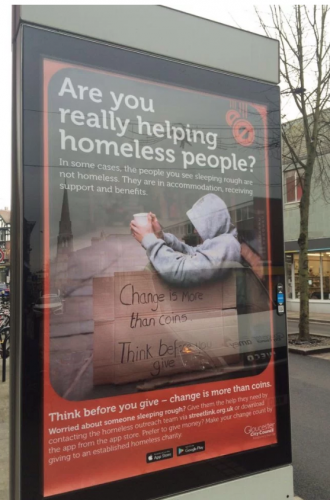 The campaign is the work of Gloucester City Council in England’s west and was apparently the idea of Conservative councillors in a bid to stop begging in the city centre.

It adds: “In some cases the people you see sleeping rough are not really homeless. They are in accommodation receiving support and benefits” and encourages people to donate to legitimate homeless charities instead.

However, Labor party members on the Council are furious that the posters were allowed to go ahead in the first place and have used them to attack the ethics of their Tory colleagues.

A Labor spokesperson said in a statement: “We are absolutely disgusted by these posters and the Tories should be ashamed they have allowed them to go up

“Clearly the nasty party is alive and kicking In Gloucester. The posters imply that most homeless people are not genuine but trying to con people out of money. This is shameful and effectively demonises one of the most vulnerable groups of people in our society who need our kindness and care.

‘We call upon Gloucester City Council to immediately withdraw these posters. We are fully supportive of the initiatives that are in place to help homeless people and would welcome these being publicised in a positive way so that the public are aware as to what they can do to help the homeless.

“Streetlink is an important organisation but its advertised in small print at the bottom of the page. The current campaign is based on negativity and not the right way to go about things,” the statement read.