Newly appointed One Nation senator, Brian Burston, has used his maiden speech to Parliament yesterday to slam (alongside immigrants and Muslims) the ABC who he believes is nothing more than a lefty, Marxist mouthpiece who should be stripped of its public funding.

Senator Burston said in his speech that the public broadcaster was biased against conservative views and had been a victim of a “cultural Marxist takeover”. 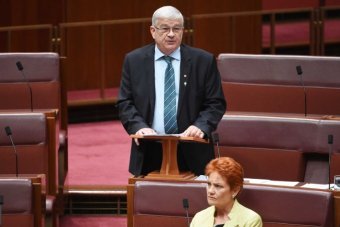 Burston said: “A fair balance might be struck by leaving the minority ethnic channels intact while transferring funding from the ABC to establish a new channel that might be called the Patriotic Broadcasting Corporation, whose explicit mission would be to represent the identity and interests of mainstream Australia.

“There is not one conservative program or anchor on the ABC, not one in a billion-dollar enterprise,” he claimed.

This morning, Burston’s boss, Pauline Hanson, said she agreed with the Senator’s views and felt the broadcaster should be “pulled into line”.

“It is a broadcasting network for the whole of Australia. I’d like to see a more balanced view with regards to their reporting,” Hanson said this morning, her comments published on a number of news websites.

“I can tell you I’ve been on Q&A myself and I’ve got a bit of a bashing around the ears,” she said.

Hanson added that Australia had people from a number of backgrounds but, she believed, the ABC only ever aired the opinions of the left.