A new report from online marketing firm RadiumOne has shown that you don’t necessarily have to shell out millions of dollars to be associated with an international soccer tournament.

The study basically proves that while sponsors like Coca Cola and Adidas have forked out the big bucks to attach their brand name to Euro 2016, a whole bunch of freeloaders are getting recognition without even signing a contract.

The report spoke to 1000 British people with an interest in the tournament, and asked them to list the five brands they most closely associated with the soccer event. While major sponsors Coca Cola and Adidas were listed most at 12 and 11 per cent, respectively, Nike somehow ended up at number three with nine per cent of respondents listing it as a sponsor, despite having no affiliation with the contest.

MasterCard, Visa, Heineken, Barclays, and Budweiser — none of which are sponsors — were also in the top ten.

Non-sponsors actually outnumbered actual sponsors in the list of the ten most closely associated brands with Euro 2016. 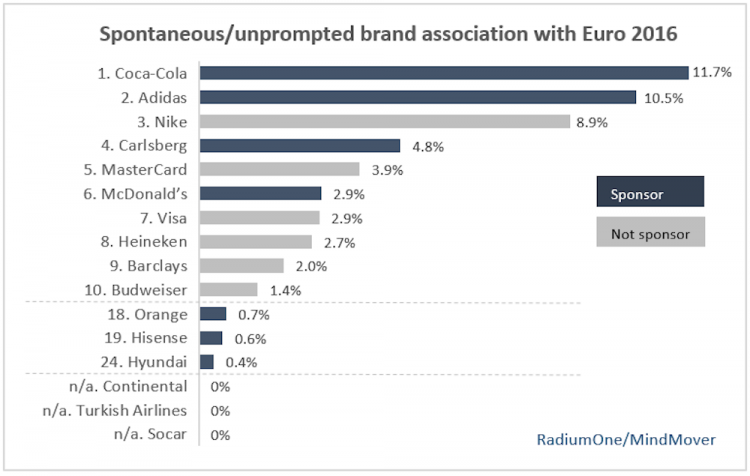 Orange, Hisense, and Hyundai — all official sponsors of the tournament – failed to even nab any brand recognition with the tournament, garnering less tham one per cent of the attention.

“With only three weeks left until the tournament starts, sponsors still have much work to do to activate their investment in terms of consumer association,” RadiumOne’s European managing director Rupert Staines said in a press release.

Staines explained that companies like MasterCard, Heineken, and Barclays benefit from the “‘halo effect” of other soccer-related sponsorships.