British discount retailer Poundland is in strife after it was busted selling a “squeezable” range of marshmallows shaped like womens’ breasts and bottoms.

The edible treats retail for just 50 pence ($A0.89) and are packaged with lines that include “be gentle” and “squidge my cheeks”, with Poundland reportedly insisting the product would only be sold to over-18s. 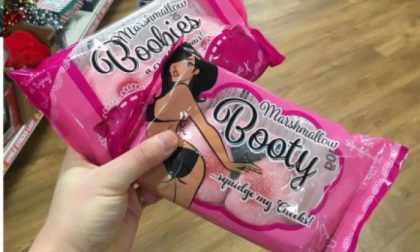 However, the racy marshmallows caught the eye of one disgruntled Poundland shopper, Gemma Aitchison, who took to social media to register her dismay about the retailer’s decision to stock the product.

“What exactly are you trying to say with these products, Poundland, to the families who come in store?” Aitchison penned to the retailer’s Facebook page.

“No sign of any male things to sexually assault. No testicles to grab at? Why do we have candy like this, usually made for children?

Other soon joined in with Aitchison’s condemnation.

“Oh my goodness. That is APPALLING. The sexualisation and objectification of women even in marshmallow form?” wrote one.

“This is gross, misogynist, and, unsurprisingly, also perverted,” wrote another non-fan.

While another said: “Poundland, can you explain why on earth you are selling these sexist products? Have you thought about the impact they might have on women and children reading the packaging?”

For its part, Poundland were having none of the criticism and stood by its sugary boobs an butts.

A spokesperson telling digital news site Metro.co.uk: “If something’s offended you, we won’t force you to buy it. It’s fine for you to look the other way and ignore it.

“Here at Poundland, we think it’s okay that sometimes we don’t always get it right for everyone. Because, frankly it’s impossible to do that.

“Just because someone doesn’t like something we do, we also believe that doesn’t give them the automatic right to stop us doing it for thousands of other people who like it,” the spokesperson said.