Nine is gambling on some fresh faces to arrest its declining Today show numbers, announcing Deborah Knight as the breakfast show’s co-host over the weekend.

Nine’s decision to go with Knight and Gardner comes as a gamble for the network desperate to regain ground on arch-rival Sunrise and given the blokey, early-morning appeal of the likes of Stefanovic and David “Kochie” Koch.

Knight and Gardner will debut next Monday during Nine’s coverage of the Australian Open tennis.

In a statement, Channel Nine’s director of news and current affairs Darren Wick called Knight “hands-down one of the best interviewers in the country”.

Wick added that Gardner was “an incredibly hard worker, she cuts to the chase with every conversation” and was “adored” by Today viewers.

“Georgie has established herself as one of the most respected presenters on television. Our viewers adore her. What you see is what you get. Authentic, caring and compassionate. Deb Knight is hands-down one of the best interviewers in the country. An incredibly hard-worker, she cuts to the chase with every conversation,” Wicks said.

However, the results remain to be seen. An article on News.com.au today showed that regular Today viewers weren’t overly happy with the line-up changes.

One angry fan posting to Nine’s Facebook page: “I have no interest in watching the Today show any more.”

While another added: “I will miss Karl… The show is stuffed now.”

Another posted: “I can’t believe they axed Tim Gilbert on top of everyone else who made the show worth watching. I’ll never watch the Today show again, how boring is watching a female only show. Good morning Channel Seven.”

Meanwhile, Stefanovic may have some explaining to do after he “liked” a comment critical of the new Today line-up.

Stefanovic “liked” a post that read: “I can’t wait until the ratings drop even lower and they realise it wasn’t you that was the problem after all.”

Even former Today host and 10 defector, Lisa Wilkinson, has weighed into Knight’s appointment.

Wilkinson used an Instagram post to congratulate Knight on her new gig before skewering the media’s reporting of Knight’s and Gardner’s ages. 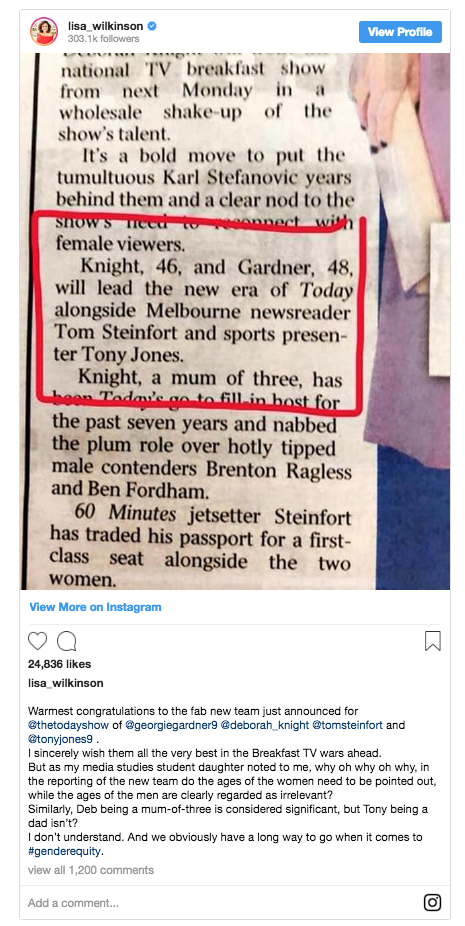 “I sincerely wish them all the very best in the breakfast wars ahead.

“But as my media studies student daughter noted to me, why oh why oh why, in the reporting of the new team do the ages of the women need to be pointed out while the men’s don’t? Similarly, Deb (Knight) being a mum of three is considered significant, but Tony (Jones) being a dad isn’t?

“I don’t understand. We obviously have a long way to go when it comes to gender equity,” Wikinson raged.