Nine is threatening to call in the defamation lawyers after a regrettable tweet over the weekend by rival Seven presenter Edwina Bartholomew (pictured below).

The tweet – which B&T can’t reproduce in full due to legal reasons – related to Nine journalist Seb Costello and read: “Surprisingly articulate for a [censored].” 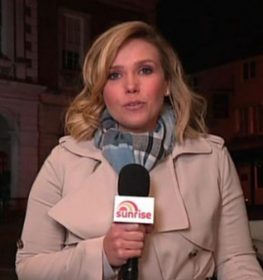 In a statement to B&T, a Nine spokesperson said: “Seb and Nine are devastated and shocked at the damaging and false nature of this personal attack on a public platform.”

Costello – who is the son of former treasurer and Nine chairman, Peter – had been reporting outside the Victorian state parliament building on a security scare involving a rogue vehicle containing flammable liquids.

The Nine reporter then tweeted the story, to which Bartholomew responded with her unsavoury response.

Over the weekend, News Corp tracked Bartholomew down to London where she is on assignment for Sunrise.

“I was half asleep and on the other side of the world,” she said.

“My apologies to Seb and all involved. No offence was intended and hopefully none was taken.

“It was clearly a mistake and the errant tweet has been deleted.”