Advertise with us
Posted 8 September, 2016


It’s been a tough year for the portrayal of vegans in Australia’s advertising industry with a new outdoor campaign for chocolate-flavoured milk the latest brand to have a go at the meat-free lifestyle. 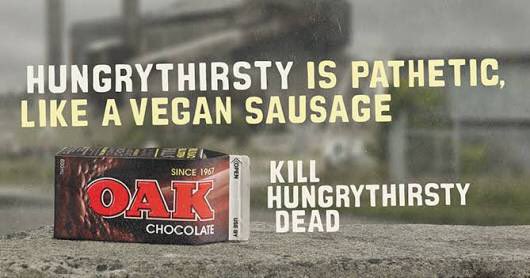 Oak flavoured milk currently has a billboard on display around the country that reads “Hungry Thirsty is pathetic, just like a vegan sausage”. Oak’s creative is done by The Monkeys, who were in strife earlier in the year for its lamb ads that showed a vegan’s apartment being torched.

People have taken to Oak’s Facebook page to vent their spleens, although when B&T checked it a number of respondents has posted positive messages about the ad, saying they got the humour.

One disgruntled person wrote: “Your company is pathetic, you poke fun at the ones fighting for the innocent beings who you support being enslaved, tortured, raped and slaughtered. Where are your standards?” While another penned: “Please remove your offensive & bullying ad against vegan food I am highly disgusted that such a big company would produce and conduct such a disgraceful act”

Last Friday, The Monkeys unveiled its latest work for Meat & Livestock Australia (MLA) which appeared to try and appease everybody!

Andrew Howie, group marketing manager at MLA, said of the ad:  “Sadly, the true face of Australia isn’t being reflected on our screens and in the media, so lamb decided to do something about it,” he said.

“Aussies from all walks of life love their lamb, no matter our ethnicity, religious beliefs or sexual orientation. We all celebrate over lamb, so this spring we’re getting everyone in the room.”